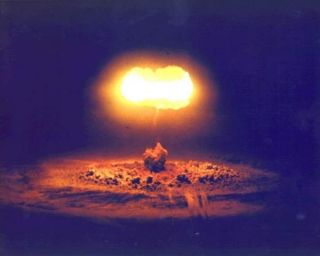 Does anything refresh the palate after a nearby nuclear explosion quite like a nice, cold beer?

A 1955 test conducted by the U.S. government suggested canned or bottled beer would be safe to drink after a mushroom cloud subsided. But scientists today question that thinking.

Science historian Alex Wellerstein recently alerted the world to the results of Operation Teapot, a series of nuclear weapons tests conducted in Nevada in 1955 that, in part, tried to answer some practical questions about what we would eat and drink if the bomb came down. Within Operation Teapot was Project 32.2a, which examined "The Effects of Nuclear Explosions on Commercially Packaged Beverages." As the report on Project 32.2a explained, "packaged beverages, both beer and soft drinks, are so ubiquitous and already uniformly available in urban areas, it is obvious that they could serve as important sources of fluids."

During the tests, a wide range of canned and bottled beverages were positioned at distances between about 1,000 feet and 2 miles away from ground zero of two nuclear explosions.

When the dust had cleared, Wallenstein says the scientists found that only the bottles closest to ground zero of the explosions had much radioactivity, and even that radioactivity was "'well within the permissible limits for emergency use,' which is to say, it won’t hurt you in the short term."

The investigators were thorough enough to have some human tasters on hand to perform "immediate taste tests" on the beer, and they found that, though the beer that was very close to ground zero had a "slight flavor change," on the whole, the drinks were all right. Just to be sure, the scientists also had samples taste-tested by no less than five "qualified laboratories," which all concurred that the bombed beers would do fine in a pinch.

However, before anyone starts buying  bulk beer for their fallout shelters, they should know that the opinions of modern science are a potential buzzkill.

Reyco Henning, an assistant professor of physics at the University of North Carolina at Chapel Hill, told Life's Little Mysteries that beer in cans and bottles would be far more dangerous after a nuclear explosion than, say, pure water in a plastic bottle.

"A nuclear explosion puts out a tremendous amount of neutrons and neutrons can transmute elements and make them radioactive," said Henning, who specializes in experimental particle astrophysics. "Generally heavier elements are more susceptible to this than light elements."

Metal cans, silicate bottles, and beer that may have picked up coppers and other contaminants in the brewing process are all much more susceptible to holding on to radiation than pure H20 in carbon-based plastic. But since most water sources are contaminated with radiation-drawing substances like chloride and potassium, Henning says the real problem would be finding truly pure water.

Still, if a bomb fell tomorrow, "I would go for the purest water you can make stored in a plastic bottle," said Henning. "Beer I would probably not drink under any circumstance."