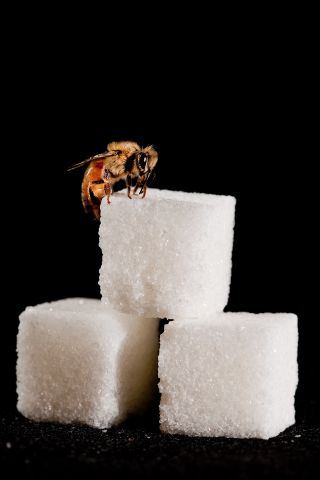 Honey bees given a compound found in red wine ate less and lived longer in a new study.

The research, published in the journal Aging, shows the compound, resveratrol, extends the lifespan of honey bees up to 38 percent and also triggers a "moderation effect," causing the bees to cut down on their food intake.

"Because what we eat is such an important contributor to our physical health, we looked at the bees' sensitivity to sugar and their willingness to consume it," study researcher Gro Amdam, of Arizona State University, said in a statement. "Bees typically gorge on sugar and while it's the best thing for them, we know that eating too much is not necessarily a good thing."

The researchers measured how much the bees ate if given the chance to have as much sugar water as they wanted.

"Surprisingly, the bees that received the drug decreased their food intake," said Brenda Rascón, a doctoral student involved in the study. "The bees were allowed to eat as much as they pleased and were certainly not starving — they simply would not gorge on the food that we know they like. It's possible resveratrol may be working by some mechanism that is related to caloric restriction — a dietary regimen long known to extend lifespan in diverse organisms."

Previous studies showed that resveratrol can extend the lifespan of other organisms, including mice. The compound was even shown to fight obesity in lemurs. However, it remains unclear whether resveratrol holds the same health benefits for humans.