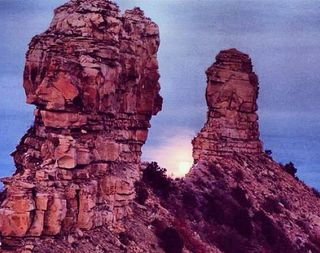 Today (Sept. 21) President Barack Obama declared Chimney Rock, in Colorado's San Juan National Forest, a national monument, according to a release from the U.S. Department of the Interior.

The designation was made under the Antiquities Act, and was supported by state politicians of both parties.

"Chimney Rock draws thousands of visitors who seek out its rich cultural and recreational opportunities," Obama said in a statement. "Today's designation will ensure this important and historic site will receive the protection it deserves."

Chimney Rock is an important site for its archaeological resources and is home to hundreds of ruins built by the Ancestral Pueblo people about 1,000 years ago. Every 18.6 years, during what is called the northern lunar standstill, the moonrise is aligned with the site's two rock pinnacles, as it is during each solstice and each equinox. Descendants of the ancient Pueblo return to Chimney Rock to visit their ancestors and for other spiritual and traditional purposes, according to the release.

President Theodore Roosevelt was the first to use the Antiquities Act, in 1906, to designate Devils Tower National Monument in Wyoming. Since then, 16 presidents have used the act to protect important American sites like the Grand Canyon and the Statue of Liberty.