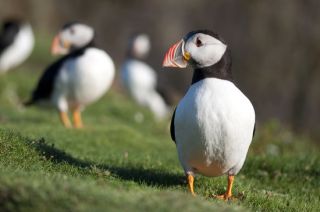 Braving pecks from sharp, colorful beaks, researchers placed tags on 25 Atlantic puffins in Ireland this summer to track the elusive birds during their winter migration.

It's unknown exactly where the birds go in the winter (other than "out to sea"), and they are difficult to track because they spend much of their time on the water.

The tags, which keep a record of the bird's location using satellites, will allow scientists to pinpoint areas that are important to the animals' survival.

Populations of puffins throughout the North Atlantic and on the island colony off the coast of southwest Ireland known as Skellig Michael have declined in recent years. The decline could be due to climate change or availability of fish prey, according to the Zoological Society of London, a conservation group involved in the project. The tags will be retrieved next summer when the birds return to their island home.

One of the first studies to track the migratory bird looked at puffin populations in the North Sea, east of the United Kingdom. That research, which used similar 1.5-gram geolocator devices, revealed that the birds migrated to the Atlantic, a one- to three-month journey.

Puffins usually spend the winter at sea, feeding on fish, and return to land in the spring to rear young.

Adult puffins weigh less than 1 pound (400 grams). Only in the past decade or so have tags been light enough to use on the birds without weighing them down.