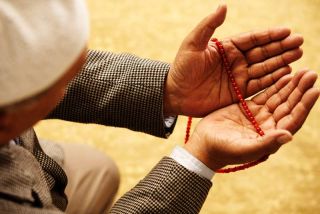 An Anti-Muslim trailer may have been a hoax, but even so it incited religious hatred and violence.
(Image: © Omer N Raja, Shutterstock)

A 13-minute amateur trailer for the film "Innocence of Muslims" depicts the prophet Muhammad as a womanizer, child molester and criminal. Though the clip had been available for at least several weeks on the Internet, protests over the film last week erupted in nearly two dozen countries, and several American embassies were attacked. Four Americans, including U.S. Ambassador to Libya Chris Stevens, were killed.

Much remains unknown about the anti-Muslim film and those behind it, leaving many to wonder if "Innocence of Muslims" is really a deadly hoax.

So far, it certainly seems that way. It was clearly intended to fool and mislead people. Several of the actors have come forward to say that they were deceived about their participation in the film. They were told the movie they were making was a low-budget film called "Desert Warriors," whose original script had no references to either Islam or its prophet. In a statement to CNN, the cast and crew involved said that they "are extremely upset and feel taken advantage of by the producer. We are 100% not behind this film and were grossly misled about its intent and purpose. We are shocked by the drastic rewrites of the script and lies that were told to all involved."

The American, mostly Californian, actors — who don't speak Arabic — had their dialogue dubbed into inflammatory Arabic lines they did not speak. The trailer's intended audience — Muslims who don't speak English and wouldn't have access to the original English script and dialogue anyway — reacted to those false, insulting words with outrage. Many Muslims were perhaps fooled into thinking that the trailer represented a real American film, though the trailer itself was blasphemous enough.

In the Muslim world, blasphemy (especially insulting their prophet Muhammad) is considered a grave offense, punishable by death. Islam, however, is hardly unique in that regard. Early Christians were intolerant of blasphemy, and in fact, Leviticus 24:16 specifically calls for blasphemers to be killed. The Hebrew Bible goes even further, specifying that those who offend God should be butchered alive and their homes destroyed (Daniel 3:29). So there is scriptural basis in both Islam and Christianity for condemning blasphemers to death. [10 Historically Significant Political Protests]

Does the film even exist?

It's not even clear that "Innocence of Muslims" even exists, especially in any finished form. While there was enough semi-professional footage to cobble together a trailer, that does not constitutea film — nor does the raw, unedited footage shot during production (called dailies). It seems that the "film" was never distributed, marketed, nor promoted anywhere. One person claiming to be the film's producer and using the pseudonym "Bacile" claimed that an early version of the film was shown in a "mostly empty" Hollywood theater to 10 or fewer people — though that, also, may be untrue.

The bottom line is that there is little or no evidence that "Innocence of Muslims," whatever it may be, exists in any form that could reasonably be considered a film. Anyone with a camera, some sound equipment, actors and an editing program can record anything and call it a film. If the purpose of the project was to make a film, it failed. If the purpose was to insult Islam and incite religious hatred and violence, then the plan worked perfectly: Editing together a short trailer is much easier and cheaper than finishing and releasing the film.

Investigation intothe film is ongoing, and much about the film remains murky, but one thing is clear:The entire story of "Innocence of Muslims" was borne of deception and malice, fueled by lies made by people hiding behind false names.

Benjamin Radford is deputy editor of Skeptical Inquirer science magazine and author of six books, including Media Mythmakers: How Journalists, Activists, and Advertisers Mislead Us. His website is www.BenjaminRadford.com.