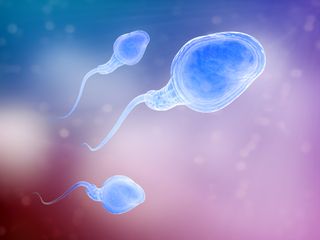 A new technique allows scientists to observe the 3D swimming paths of thousands of cells at once. The technique's creators applied the method to sperm, but it could be used to study any type of cell.
(Image: © Mopic | Shutterstock.com)

You could call it keeping an eye on what's important.

A new technique has allowed scientists to track every move of more than 1,500 human sperm cells swimming simultaneously in a volume of about one one-hundredth of a milliliter. That's less than the volume of a drop of water, but nonetheless large for the cellular world. Over several tests, engineers at the University of California, Los Angeles observed 24,000 individual sperm cells, enough to discern rare behaviors researchers miss when they study smaller samples.

The sperm-spying opens the door to the study of how drugs affect a large number of cells, researchers say. Scientists could also use the technique, which produces a holographic image, to learn more about single-celled swimming organisms that carry disease in drinking water. "The holographic technique could accelerate drug discovery and prove valuable for monitoring pharmaceutical treatments of dangerous microbial diseases," Leon Esterowitz, a National Science Foundation officer who oversaw funding for the UCLA study, said in a statement.

What counts as rare sperm behavior? Typical sperm swim in squiggly path, but 4 to 5 percent of the sperm in the study swam in well-defined helixes, which no one had ever seen before. Of those circular swimmers, about 90 percent swam in a right-handed helix, while the remaining 10 percent swam in a left-handed helix. The new cell-watching method allowed researchers to see helical sperm paths that were less than 1 nanometer in diameter.

Other unusual behaviors included swimming in wandering paths at twice the speed of typical sperm, and swimming in very wide, sloppy helixes. Most sperm swim in unusual fashion for only a short period before switching back to the usual method, the researchers found. What causes sperm to swim differently is still unclear, the researchers wrote in their study.

The new cell-visualizing method uses a blue LED and a red LED set at a 45 degree angle from one another to create a holographic image. The technique's creators also wrote a computer program to process the enormous amount of data coming from their observing equipment.

They published about their work today (Sept. 17) in the journal the Proceedings of the National Academy of Sciences.