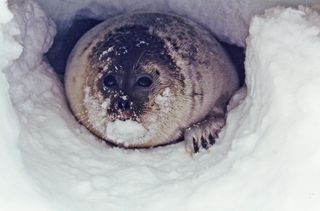 A ringed seal peaks out from its snow cave.
(Image: © Brendan Kelly, NSF)

Arctic-dwelling ringed seals build snow caves on top of sea ice so they can shield their pups from freezing temperatures and predators. But shrinking snow cover could threaten the seals' ability to make these icy lairs, researchers warn.

The seals need at least 8 inches (20 centimeters) of snow cover to make their shelters. While the mid-winter snowfall rate is expected to increase slightly by the end of the century, Arctic sea ice is expected to start forming later in the season. This means that heavy snow falling earlier in the winter will drop into the ocean instead of piling up on the ice, the researchers said.

Drawing on 10 different climate models, the researchers predicted that the area of the Arctic that gets 8-inch accumulations of snow will drop by almost 70 percent during the 21st century. This would significantly reduce the area where ringed seals can build sufficient caves. Earlier snowmelts and increased rainfall will also threaten to dissolve the seals' caves before the pups are ready to venture outside on their own, the researchers said.

Ringed seals are currently under consideration for threatened species listing. In fact co-researcher Brendan Kelly of the National Science Foundation was interested in the trend in snow depth because he was contributing to a government report related to the petition to get the ringed seals listed.

In addition to its importance to the health of ringed seals, the snow cover is also critical to sea-ice thickness, which, in turn, is critical to the livelihoods of animals like polar bears and walruses that use the ice as habitat. Since snow is more reflective than ice, it also has a cooling effect on the surface. "So the presence of snow helps sustain the icepack into spring time," Hezel said.

The study was led by researchers at the University of Washington and published Sept. 15 in the journal Geophysical Research Letters.