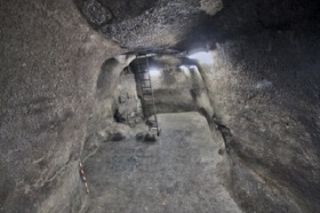 Archaeologists have found an ancient water reservoir in Jerusalem that may have been used by pilgrims coming to the Temple Mount, the Israeli Antiquities Authority (IAA) announced.

The IAA said the cistern could have held 66,000 gallons (250 cubic meters) of water; it likely dates back to the era of the First Temple, which, according to the Hebrew Bible, was constructed by King Solomon in the 10th century B.C. and then destroyed 400 years later.

Israeli archaeologists believe the reservoir served the general public in the ancient city, but say its location hints at a role in the religious life of Jerusalem.

"Presumably the large water reservoir, which is situated near the Temple Mount, was used for the everyday activities of the Temple Mount itself and also by the pilgrims who went up to the Temple and required water for bathing and drinking," Tvika Tsuk, chief archaeologist of Israel's Nature and Parks Authority, said in a statement.

Excavation director Eli Shukron, with the IAA, said the reservoir also sheds new light on the extent of the public water system in Jerusalem hundreds of years ago.

"It is now absolutely clear that the Jerusalem's water consumption during the First Temple period was not solely based on the output of the Gihon Spring, but that it also relied on public reservoirs," Shukron said in a statement. The Gihon Spring was the main source of water for the city.

The reservoir was exposed during excavations on a massive drainage channel dating to the Second Temple period, according to the IAA. When that channel was constructed, its builders had to remove or cut through existing rock-hewn structures along the route, such as this reservoir.

Archaeologists with the IAA said they were able to estimate the age of the cistern based on signatures in its plaster treatment and its similarities with other First Temple reservoirs at sites such as Tel Be'er Sheva, Tel Arad and Tel Bet Shemesh.

The group presented their findings Thursday (Sept. 6) at an annual conference on the City of David Studies of Ancient Jerusalem.