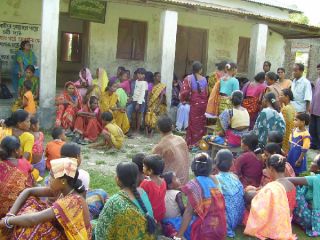 Indian village women, organized around a small, low-interest loan program, aren't just making money, they are helping prevent the fatal witch hunts that can target their neighbors, according to researchers who worked in the tea plantations of Jalpaiguir, India.

Tribal women here form support groups when they receive the loans. These groups typically of about eight to 10 women have protected other women from these hunts, according to Soma Chaudhuri, a sociologist at Michigan State University, who studied witch hunts in her native India for seven months.

Witch hunts are a long-standing practice here. The tribal plantation workers are poor and illiterate, and have a desperate need to make sense of rampant diseases in villages with no doctors or medical facilities, Chaudhuri said.

In 2003, for example, villagers accused five women of witchcraft that caused the death of a male villager from a stomach illness. They were tied up, tortured and killed.

But women's groups have intervened to stop potential attacks. In one case documented in Chaudhuri's study, a woman was accused of causing disease in livestock. Group members gathered in a vigil around her home and the home of the accuser. They stated their case to the accuser's wife, who intervened. The accuser's husband ultimately recanted his accusation and asked forgiveness.

The loan program in question gives women low-interest, collateral-free "microcredit" loans of about 750 rupees ($18) to start their own businesses, such as basket weaving, tailoring or selling eggs. The women support one another through these small groups. [6 Misconceptions About Wiccans]

The activists behind the loans have encouraged the women to address domestic abuse, alcoholism and the witch hunts. And collectively, the women are able to resist the tradition of witch hunts, Chaudhuri said.

"Why would they go against something so risky, something that breaks tradition?" she said in a statement. "They do it because they believe in the ideals of the microcredit group – in women's development, family development and gender equality."

Chaudhuri's work with Anuradha Chakravarty of the University of South Carolina was published in the June 2012 issue of the journal Mobilization.

Editor's Note: This story has been updated to correct the university, which should be Michigan State University, not the University of Michigan.