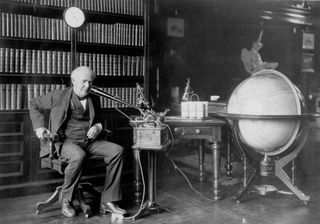 When Thomas Edison finally hung up his lab coat, it still had acid burns from chemistry experiments carried out at the U.S. inventor's West Orange laboratory in New Jersey. Repairs helped erased the burn marks, but added wear and tear from decades of display on a wire hanger has compelled the U.S. National Park Service to launch a new conservation project.

The worn lab coat is just one of three artifacts in need of repair at the Thomas Edison National Historical Park, according to a FedBizOpps solicitation posted on Aug. 20. A second object, a faded American flag, represented a 1920 gift commemorating the 43rd anniversary of the "Ediphone" dictating machine. The third artifact hangs behind Edison's desk in his laboratory library — a projection screen that is likely the world's oldest movie screen by being dated to at least 1893.

"Probably most significant of the three is Edison's laboratory coat," said Joan Harris-Rico, collections manager at the Thomas Edison National Historical Park. "It's made of cotton in the duster style, and has hung in the chemistry lab for decades."

Edison remains celebrated for having helped pioneer practical light bulbs, the sound recording industry and for helping commercialize movies. But his artifacts also bear silent testimony to the legacy of laying down the blueprint for modern innovation — bringing together a diverse group of Ph.D. chemists, machinists and inventors to all work under the same roof. [Thomas Edison: America's First Modern Innovator]

The lab coat carried a particularly poignant note for visitors as a personal reminder of Edison's work. But the national park staff has removed the coat from public display until it can be repaired.

"It not only has high historical value, but is also a favorite object of returning visitors," Harris-Rico told InnovationNewsDaily. "People will often ask, 'Where is the lab coat?'"

The U.S. flag remains on display in a wood and glass wall-mounted case, but its fabric colors have faded from 90 years of exposure to ultraviolet light. The fabric has "puckered" due to gravity's inexorable pull, and it also shows signs of both insect activity and water damage.

Harris-Rico and her colleagues hope to return the repaired flag to a new display case that has UV-filtered Plexiglas protection and without the acidic cardboard backing in the existing case.

Conservators could remove both the lab coat and flag to do their preservation work, but they probably won't enjoy the same luxury with Edison's ancient projection screen. The huge canvas, stretching 18 feet by 18 feet, hangs from a wood roller attached to the underside of the library's second floor balcony.

The screen's blemishes include at least one tear and brittleness near its stained bottom edge. But the full extent of the damage remains unknown until the screen gets unrolled — a process still done manually by a large wooden handle almost 120 years later.