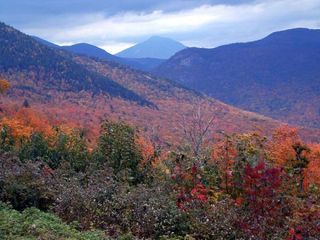 Northeastern trees may put on a better fall foliage show than usual this year.

That's because lower than average levels of rain in New York and in some areas of the Northeast may lead to an earlier retreat of chlorophyll, the green pigment that allows plants to harness the sun's energy, said Donald Leopold, a tree researcher at the State University of New York in Syracuse.

With chlorophyll gone, other pigments in leaves become visible. These include carotenes and xanthophyll pigments, which appear yellow to orange and are present during the growing season but are masked by the green.

Reddish leaf colors stem from anthocyanins, which are only produced in the fall and are a reaction to stressful conditions. They act like sunscreen for the leaf, blocking out harmful radiation and shading it from excess light. They also help protect the plants' cells from freezing as temperatures drop.

In Syracuse and elsewhere, temperatures have begun to dip into the mid-50s (in degrees Fahrenheit) some nights, a sign of cooler temperatures ahead, Leopold told OurAmazingPlanet. Colder temperatures and shortening days serve as signals to plants to begin reducing the amount of chlorophyll produced and to start preparations for winter, which involves moving sugar and nutrients from leaves to roots.

Sufficiently cool temperatures can also directly reduce the amount of chlorophyll produced. Without being continuously renewed, chlorophyll breaks down and eventually leaves will fade from green to yellow or red.

Also potentially affecting the fall colors is the little rainfall that has occurred in the area this year, Leopold said.

Some trees are already showing color due to stress, Leopold said. When a tree doesn't get enough water or is otherwise harassed, it may quit producing chlorophyll earlier, allowing colors to show. This strategy allows it to prevent itself from losing water and to wait out the winter.

Fall colors are best when there is a moderate drought, but not so much of a drought that leaves wilt and curl up or fall off, he said.

It's too early to tell for sure whether it will be an unusually colorful year, though, since colors don't peak until October and conditions in the interim will affect the outcome.