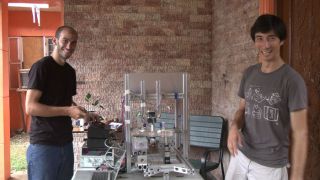 Making clean energy fit into a person's pocket would be a neat trick, and two inventors have begun working on the solution. They envision tiny automated factories that make solar panels as small as a person's fingers.

The table-size Solar Pocket Factory could churn out a solar panel every 15 seconds, giving full-size factories in China a run for their money, say Shawn Frayne and Alex Hornstein, who are hoping to raise $50,000 on the crowd-funding website Kickstarter to finish their prototype and prepare for a product launch in 2013.

The two inventors have already tested microsolar panels for charging mobile phones, powering energy-charging stations at the High Line park in Manhattan, and even replacing the batteries in a daughter's toys.

Today's small solar panels cost about twice as much as big solar panels and typically fail within two to five years. Frayne and Hornstein say they have figured out how to shave 30 percent off the cost and make "microsolar" panels that would last five times longer.

The solution comes from building an automated factory that can churn out solar panels of a consistent quality based on higher-quality materials. Such automation not only would sidestep the costs of human labor required to glue and assemble every part of the tiny panels by hand, it would cut down on the costs of dealing with flawed panels that get thrown out and wasted, the two inventors say.

Rewards for people who donate to the Kickstarter project include kits for assembling solar panels that can power a person's own smartphones or household gadgets.

Success for the Solar Pocket Factory could signal yet another step toward robotic factories that would change the world — in terms of both spreading clean-energy technologies and disrupting the human work force. The Pentagon has started its own project to create robotic sewing machines capable of outcompeting human workers in Asian factories.