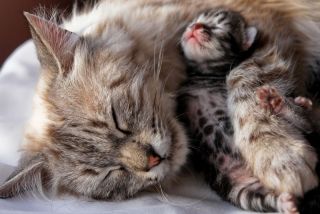 Phewww, this mama cat went through about 63 days of pregnancy before giving birth to a furry kitten.
(Image: © Orhan Cam | Shutterstock)

Cats always seem to get a bad rap. Perhaps one of the most commonly held beliefs about cats — right behind the one that says that black cats are bad luck — is that cats will suck the breath from infants, ultimately killing them. There are two prevailing ideas to explain why your cat would want to suffocate your new bundle of joy: Cats love milk and are drawn to the smell of a baby’s milky breath, and cats supposedly get extremely jealous when babies usurp your attention away from them. While a cat could accidentally suffocate a sleeping baby by cozying up too close to its face, experts agree it’s highly unlikely a cat would smother an infant on purpose. Reports of cat-caused infant deaths are scarce, so how did this tale become so common? One case from 300 years ago may have given this tale all the oomph it needed to reach its current scare level. In the Annual Register, a publication that records the year’s interesting events, there is an entry for Jan. 25, 1791: “A child of eighteen months old was found dead near Plymouth; and it appeared, on the coroner's inquest, that the child died in consequence of a cat sucking its breath, thereby occasioning a strangulation." Coroner knows best, so it must be true, right? Adding to this report is the fact that cats have long been thought of as the familiars of witches, so if parents (or even coroners) found an infant dead with a cat nearby, the cat was automatically blamed for the incident. Nowadays, however, we know that otherwise healthy babies can die without any known causes, an occurrence known as sudden infant death syndrome.