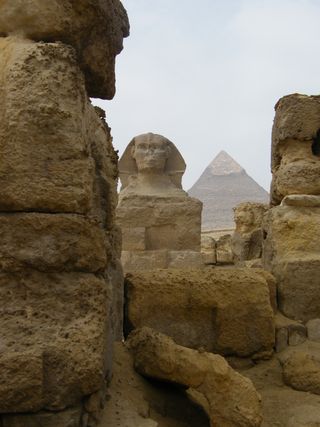 The Sphinx and the Great Pyramid of Giza, Egypt are pictured here. USGS and University of Pennsylvania research shows that ancient pollen and charcoal preserved in deeply buried sediments in Egypt's Nile Delta document the region’s ancient droughts and fires, including a huge drought 4,200 years ago associated with the demise of Egypt's Old Kingdom, the era known as the pyramid-building time.
(Image: © Benjamin P. Horton , University of Pennsylvania )

Researchers say they've traced a record of ancient Egypt's droughts and fires with fossil pollen and charcoal deposits preserved in the Nile Delta. The record provides evidence for historic climate catastrophes, including a huge drought linked to the downfall of Egypt's Old Kingdom, the era sometimes known as the Age of the Pyramids.

Scientists with the US Geological Survey (USGS) and the University of Pennsylvania expected that they would find less wetland pollen, an indicator of vegetation, and more deposits of charcoal, the leftovers from fires, in buried sediments from times of drought. USGS reported that they found exactly that in four different periods up to 6,000 years ago.

One of those droughts documented in the study occurred around 3,000 years ago and is linked to the fall of the Ugarit Kingdom and famines in the Babylonian and Syrian Kingdoms in the Near East. The researchers also found evidence of a global mega-drought of around 4,200 years ago, which had serious consequences, including famines, and probably played a role in the end of Egypt’s Old Kingdom, USGS officials said.

"Even the mighty builders of the ancient pyramids more than 4,000 years ago fell victim when they were unable to respond to a changing climate," said USGS Director Marcia McNutt said in a statement. "This study illustrates that water availability was the climate-change Achilles Heel then for Egypt, as it may well be now, for a planet topping seven billion thirsty people."

The research appears in the journal Geology.