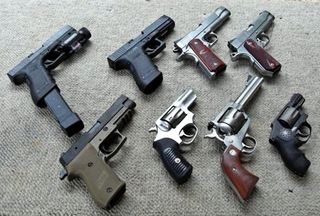 In the aftermath of the Colorado shooting, the nation's thoughts have turned to how such a tragedy could have been prevented. With predictable polarity, some argue for stricter gun regulations, while others assert that if only more citizens carried concealed weapons, an armed moviegoer could have shot James Holmes, the alleged Colorado gunman, stopping him in his tracks.

Would the presence of a concealed handgun in the crowd really have prevented the massacre? And in general, do more guns mean more or less crime?

Daniel Webster, co-director of the Johns Hopkins Center for Gun Policy and Research, said it's impossible to know what would have happened had someone else been armed in the Aurora movie theater last Thursday night. However, Webster added, it's "preposterous" to boldly assert that a concealed handgun would have prevented the tragedy.

"What could have conceivably happened is that someone with a gun in the theater could have started firing rounds and hit other people," Webster told Life's Little Mysteries, a sister site to LiveScience. "Law enforcement officers make that mistake all too commonly. What would a citizen do amid all that smoke and chaos?"

Rather than getting mired in the details of this tragic incident, a more answerable question, Webster said, is whether public safety would increase overall if more people went into crowded theaters with guns. He says the numbers suggest otherwise.

Thirty years ago, most Americans couldn't legally tote a gun in public. Gun rights have expanded over time, and according to a report issued July 17 by the United States Government Accountability Office, 49 states now have "right to carry" (RTC) laws on the books, allowing citizens to carry certain concealed firearms in public after obtaining permits from local government or law enforcement. Also over time, states have consistently become less restrictive in how they issue permits, tending to move from "may-issue" policies (whereby permits are issued only at the discretion of local law enforcement) to "shall-issue" policies (where anyone who can pass a background check is able to get a permit). Three states even have unrestricted policies: no permit required. [Why Gun Control Is So Contentious in the US]

Numerous studies have investigated the effects of these right-to-carry laws on crime rates. To the great astonishment of most gun-policy experts, research published in 1997 led by the economist John Lott seemed to indicate that RTC laws actually reduce crime rates, presumably by deterring would-be criminals and enabling armed citizens to protect themselves.

Although Lott's work still gets cited by the National Rifle Association and others as evidence in favor of greater gun freedom, the research "was found to be substantially flawed," Webster said. A 2003 analysis by law professors Ian Ayres of Yale University and John Donohue of Stanford found that none of the crime reductions found in the study were statistically significant, and the results changed drastically in response to minor changes in initial assumptions — the mark of nonrobust findings.

As more data piled up, a different picture began to emerge. According to a 2011 review of 30 years of data and research by Donohue and colleagues, right-to-carry laws don't consistently increase or decrease most types of violent crime, although many studies have been conducted that show slight indications of both. The laws do appear to cause a modest increase in violent assaults.

"Overall, the most consistent, albeit not uniform, finding to emerge from both the state and the county [data covering the 1977–2006 period] is that aggravated assault rises when RTC laws are adopted. For every other crime category, there is little or no indication of any consistent RTC impact on crime," the researchers wrote in the journal American Law and Economics Review.

The idea that concealed carry could have prevented the Colorado shooting is, in Webster's opinion, a fantasy. "It's easy for people to fantasize that some heroic activities by citizens will save the day," he said. The truth is usually not so epic.