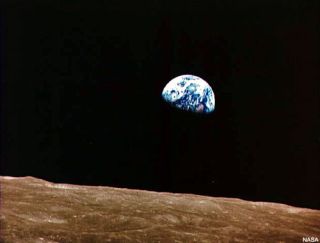 The ever-so-slight slowing of Earth's rotation means a leap second must be added to our clocks every few years to keep atomic clocks in sync with Earth, shown here in an image taken by the Apollo 8 astronauts in December 1968.
(Image: © NASA)

This Saturday, June 30, expect a lengthier day, as an extra leap second will be added to Earthlings' clocks.

What's behind this leap second? The ever-so-slight slowing of Earth's rotation, or the 24-hour spin that brings the sun into our skies every morning.

Historically, humans based time on the average rotation of the Earth relative to other celestial bodies, with the second defined by this frame of reference. However, the invention of atomic clocks — accurate to about one second in 200 million years — brought about a definition of a second independent of Earth's rotation. Instead, they're based on a consistent signal emitted by electrons changing energy states within an atom.

Earth has been falling behind the atomic time at a rate of about 2 milliseconds per day, currently trailing the atomic time by six-tenths of a second. Every now and then a leap second must be added to atomic clocks (and thus all of our clocks) to keep in sync with Earth's oddball rotation.

This Saturday will mark the 25th time a leap second has been added since the practice started in 1972. The most recent leap second occurred in 2008 on New Year's Eve.

The Earth truly is a planet of extremes, from ice-cold tundra to steamy rain forests, from ocean trenches to snow-covered peaks.

At 7:59:59 p.m. Eastern Daylight Time (EDT), or 23:59:59 Coordinated Universal Time (UTC), an extra second will be added to the atomic clock at the U.S. Naval Observatory's Master Clock Facility in Washington, D.C.