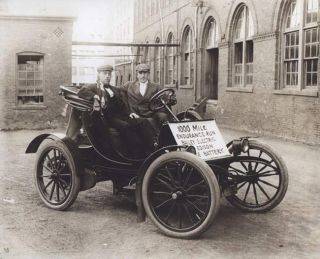 To demonstrate the reliability of the Edison nickel-iron battery, drivers rode a battery-powered Bailey in a 1,000-mile endurance run in 1910. The same battery technology is now getting a modern makeover.
(Image: © National Park Service)

Thomas Edison didn't just have telegraphs and light bulbs on his mind — the U.S. innovator marketed an electric car battery in the early 20th century. The same nickel-iron battery technology could soon make its return as a fast-charging power source for the 21st century.

The modern makeover of Edison's battery can fully charge in about 2 minutes and dump its energy load in less than 30 seconds — about 1,000 times faster compared with the original. Existing prototypes can only hold enough power for a flashlight, but Stanford University hope to scale up the fast-charging battery to make Edison's dream competitive once more in electric cars.

"The Edison battery is very durable, but it has a number of drawbacks," said Hongjie Dai, a professor of chemistry at Stanford University. "A typical battery can take hours to charge, and the rate of discharge is also very slow."

Edison's battery got its needed boost in charging speed with the help of nanotechnology. Researchers bonded the battery's metal particles with carbon nanomaterials — graphene (sheets of carbon just 1-atom thick) and multiwalled carbon nanotubes — that can increase electrical conductivity.

"Our battery probably won't be able to power an electric car by itself because the energy density is not ideal," said Hailiang Wang, a graduate student at Stanford University and lead author on the group's new paper. "But it could assist lithium-ion batteries by giving them a real power boost for faster acceleration and regenerative braking."

Edison first unveiled the nickel-iron battery around 1900 as a cheap alternative to lead-acid batteries with long life and reliability. The battery only saw use in early electric cars until 1920, but it became a popular backup power source for the railroad and mining industries until the mid-20th century. [Thomas Edison: America's First Modern Innovator]

Today's nickel-iron batteries usually find work storing electricity from solar panels and wind turbines. The Stanford group's version has increased the charging speed, but still wants to make it better at holding its charge over time — the current charge decay is roughly equivalent to that of a lithium-ion battery.

Success could make the batteries useful once more for hybrid and fully electric cars. Even the U.S. military could use such batteries in cases where soldiers need to charge something quickly.

"Hopefully we can give the nickel-iron battery a new life," Dai said.

The research had funding support from Intel and is detailed in the June 26 issue of the journal Nature Communications.