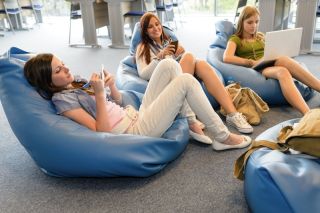 An increase in mobile devices and social networking means that teens are more plugged-in than ever before.
(Image: © CandyBox Images, Shutterstock)

More than 70 percent of teens hide some of their online behavior from their parents, according to a new study that finds plenty of young people are using the Internet in ways that might surprise mom and dad.

Some youthful online behaviors enter into illegal territory. About 31 percent of the teens surveyed said they'd pirated music and movies online, which can have legal consequences for parents, said Robert Siciliano, an online security expert for McAfee, the computer security firm that commissioned the survey.

"Ultimately, it falls on their parents, because more than likely it is their parents who are responsible for paying the Internet bill," Siciliano told LiveScience. [10 Scientific Tips for Raising Happy Kids]

What teens do online

The survey, carried out by marketing research firm TRU, queried 1,004 teens ages 13 to 17 and 1,013 parents of teens of the same age in May 2012. Although the study was not nationally representative, participants were distributed geographically in line with the U.S. Census. Fifteen percent of respondents were Hispanic and 15 percent were African-American.

The results revealed a parent-teen disconnect around Internet use. Parents believed their kids spent an average of two hours a day online; in fact, teens reported being online for five hours each day. While only 22 percent of parents thought their kids checked their social networking sites "constantly," 41 percent of teens described themselves as constantly on Facebook, Twitter and other social media sites.

Should parents have access to their teens' online accounts?

Forty-three percent of teens said they'd accessed violent content online, and 36 percent said they'd looked up sexual topics on the Internet. Of the third of teens who had searched for pornography, 43 percent did so on at least a weekly basis.

The Internet has also provided new avenues for cheating, the survey found. Forty-eight percent of teens had looked up test and homework answers online, and 22 percent said they'd snuck a look at answers online or via mobile phone during a test. Only 23 percent of parents knew their kids used the Internet to find assignment answers, and only 5 percent suspected that their child might outright cheat using the Internet during an exam.

Unsurprisingly, teens are good at hiding their online activities, the survey found. Seventy-one percent had done something to hide their online behavior, such as clearing their Web browser history (53.3 percent) and minimizing the browser when mom or dad walked by (45.9 percent). The total number of kids hiding online behavior is up from 45 percent in a similar survey in 2010. [Top 10 strategies teens use to hide online activity]

Few parents are aware that their children use these strategies, with only 17.5 percent suspecting that their kid might clear a browser history and only 16.6 percent catching kids hitting the "minimize" button when they walk in the room. Twenty-three percent of parents said that they were overwhelmed by technology and didn't even try to keep up with their kids' online savvy. Another 23 percent said they just didn't have the time or energy or keep up with what their teens do online.

That's a troubling attitude, according to Siciliano, who compared using the Internet to learning how to drive.

"You wouldn't just stick a kid in the car and say, 'Okay, teach yourself to drive,'" he said. "You want to train them. You want to be there with them every step of the way until they're capable of doing this on their own."

McAfee and other companies offer parental control software, which almost half of the parents surveyed said they used to limit their kids' online activity. (Most of the parents using this software have younger teens.) [Top Parental Control Software of 2012]

Siciliano said the other solution is "parenting 101" — keeping an ongoing dialogue with your teen about Internet use and what is acceptable and safe.