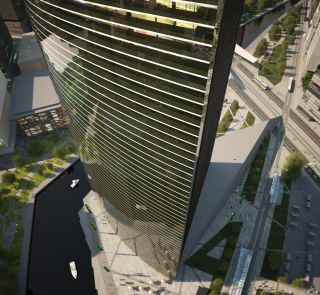 By expanding the greenhouse vertically, the crops produced through Plantagon’s patented technology, in relation to the land area used, will increase considerably permitting multiple harvests for the same growth period. The commercial area will be designed and constructed in an equally sustainable way as the greenhouse in terms of energy efficiency, materials and hi-tech solutions.
(Image: © Plantagon | Sweco)

NEW YORK — Seven billion humans need farms that cover a land mass equal to South America, but tomorrow's farmers may need even more space to grow food for hungry mouths. Such urgency has given root to a new agricultural idea in the past few years — building vertical farms that climb toward the sky or burrow beneath the Earth.

Vertical farming got a big boost from a class taught by Dickson Despommier, a microbiologist and ecologist at Columbia University, in 1999. The students' ideas spread virally across the Internet and led to the rise of the first modern vertical farms in the U.S., South Korea, Japan and Singapore. Sweden has plans for a vertical farm skyscraper reaching 17 stories in height.

"There are now real vertical farms," Despommier said. "You have no idea how proud I am of 106 students that worked over the period of 10 years to make this happen."

Vertical farms offer the vision of growing whatever people want, wherever they want. The indoor facilities can grow crops all year long without droughts or similar weather-related events wreaking havoc. Some designs can even make more efficient use of water compared to outdoor farming — and they could save outside space for wilderness or similar natural habitats. [Real Farmville: iPad Game Would Let Pigs Play with Humans ]

Still, many people thought vertical farms were crazy even up to three years ago, Despommier said. His satisfaction was evident as he showed pictures of existing vertical farms during a talk at the World Science Festival's "Innovation Square" event on June 2.

The most futuristic farms exist in Asian countries such as South Korea, Japan and Singapore where crowded cities and scarce land make vertical farming most appealing. "I wish we were the world's leader in this, but right now it looks like Korea and Japan are light years ahead of us," Despommier said.

South Korea took inspiration from Despommier to build a three-story vertical farm with robotics and LED lights in the city of Suwon. Another seven-story vertical farm that grows plants shelf-like layers has sprouted in Yongin under the company Insung Tech.

The Japanese company Nuvege has built a vertical farm in Kyoto based upon familiar hydroponic farming methods that don't require soil. The Japanese government has also begun planning a vertical farm near the site of the Fukushima nuclear disaster as part of a bigger plan to robotically clean up farmland ravaged by a huge earthquake and tsunami in 2011.

Europe has become home for some wilder visions of vertical farming — Sweden's Plantagon began building the 17-story vertical farm in Linkoping in February. Meanwhile, the PlantLab company wants to experiment with crop lighting conditions in a three-story underground farm in the Netherlands.

Even the U.S. has begun sprouting a few vertical farms. A former Chicago meatpacking plant has begun transforming into a vertical farm known simply as "The Plant," and the "Vertical Harvest" project is raising funds for a three-story greenhouse in Jackson, Wyoming.

The vertical farm dream is still growing both literally and figuratively. Despommier envisions modular vertical farms that can be shipped to the sites of natural disasters or civil unrest.

"So when you're in a pinch … you can ship these things, lock them together like Legos, and you've got your vertical farm sitting right in front of you with produce in it for people who need it," Despommier said. "That's my dream."