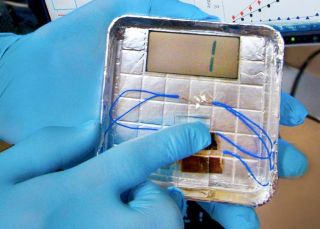 The virus-based generator works by tapping a finger on a postage stamp-sized electrode coated with specially engineered viruses. The viruses convert the force of the tap into an electric charge.
(Image: © Lawrence Berkeley National Laboratory)

Scientists have just put pesky viruses to work, for us, using the teensy particles to generate electricity.

So far, they have produced enough energy with these harmless viruses to power a small liquid-crystal display.

The researchers think their findings could lead to a "personal power generator in the near future," study researcher Seung-Wuk Lee of the University of California, Berkeley, told LiveScience. "Therefore, by walking around, we can charge our cellular phone." The device could also replace batteries as a self-sustaining power source for environmental sensors.

And being that the device would be biocompatiable, Lee foresees its use in biomedical devices, powering pacemakers and hearing aids, for instance.

Lee, also a scientist at the Lawrence Berkeley National Laboratory, and colleagues focused their research on a virus called M13 bacteriaphage that attacks bacteria but is benign to people. Particularly they were looking for a strong piezoelectric material, or one that generates electricity due to mechanical stress.

To see if the virus was piezoelectric, the researchers applied an electric field to a film of M13 viruses. They found that proteins coating the viruses began to twist and turn, a telltale sign of the piezoelectric effect at work, they noted.

But how much voltage could these viruses produce? The researchers genetically tweaked the viruses to boost the negative charge of one end of the proteins coating the viruses; this increased the charge difference between the positive and negative ends of the proteins. The resulting viruses had higher voltage.

Next, they stacked films of the virus 20 layers high, a design that proved optimal for a strong piezoelectric effect, meaning more electrical output.

In their test, the researchers created conditions under which the viruses would organize on their own into a multilayered film measuring about 0.16 inches (1 square centimeter). They sandwiched this tiny, paper-thin device between two electrodes that were connected to a liquid-crystal display.

When pressure was applied to the generator (the tap of a finger), it produces up to 6 nanoamperes of current and 400 millivolts of potential, which was enough current to flash the number "1" on the display; it's also the equivalent of about a quarter the voltage of a triple-A battery.

"We're now working on ways to improve on this proof-of-principle demonstration," Lee said. "Because the tools of biotechnology enable large-scale production of genetically modified viruses, piezoelectric materials based on viruses could offer a simple route to novel microelectronics in the future."

For instance, they are working on a directed evolution technique, in which they construct maybe a billion viruses using genetic engineering. Then they would use a process similar to natural selection to find the best virus with the optimal energy-generating abilities. "Basically, we can induce fast evolution in biological nanoparticles (viruses)," Lee said.

The scientists describe their work in a May 13 advance online publication of the journal Nature Nanotechnology.