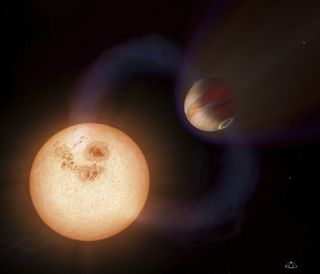 An artist's interpretation of an exoplanet discovered by the Hubble Space Telescope.
(Image: © NASA, ESA, and A. Schaller for STScI )

Writing in the open-access journal PLoS ONE, Scripps Research Institute scientist Gerald Joyce said that frenzies such as the one over alleged arsenic-eating bacteria in 2010 could ultimately lead to lack of interest in the kind of science it would take to discover new life forms, should they exist.

"I just worry that we cry wolf too many times, and people are going to start tuning it out," Joyce told LiveScience.

"Let's just cool it on these false alarms," he added.

False alarms over new life forms have ranged from the arsenic bacteria kerfuffle ? in which scientists announced they had found bacteria that could incorporate arsenic rather than the usual phosphorous into their DNA ? to synthetic biology, such as molecular biologist J. Craig Venter's transplant of a synthetic genome into a living cell.

Though both studies represent important work, Joyce said, neither qualifies as new life. The arsenic bacteria fit firmly into the known tree of life, and their arsenic-eating abilities are still under scrutiny. Venter's synthetic genome required an already living cell to function and was glued together from pre-existing DNA snippets. [7 Theories on the Origin of Life]

With the increasing discovery of planets in "habitable zones" orbiting far-off stars, Joyce expects more claims of potential extraterrestrial life to add to hype about new life forms on Earth. In fact, he said, the idea that there is surely life on more than one of so many habitable planets out there is based on nothing more than wishful thinking. As it is, scientists have no idea what the probability of life might be or what it would take to get a new life form started, Joyce said.

In his essay and accompanying podcast, Joyce calls for a sober look at the possibility of new life forms. Biology is "chemistry with its own history," he said, meaning that life is simply a chemical process capable of holding a molecular memory that evolves over generations. These memories are like "bits" of information stored in a computer, Joyce said, and all known life is part of the same system here on Earth.

With only one system to look at, researchers can't statistically infer the likelihood that life arose elsewhere in the universe, too, Joyce said. There's no way to know whether we're one of many or one of a kind, or whether life arises easily or only in extraordinarily rare cases.

"We can take pure chemicals in a test tube and stack the deck like crazy to try to get something replicating and evolving, and that hasn't happened yet," Joyce said. "Right now the jury's out on whether it's hard or easy."

If or when scientists do find extraterrestrial life or create synthetic life in the lab, they'll have more information on which to base the likelihood of other unique life out there in the universe, Joyce said. For now, he said, researchers should "hunker down" and avoid the temptation to overhype the possibility of new life forms.

"To me, it's something kind of fundamental about human loneliness," Joyce said. "We just wish it to be, so that we're not alone."