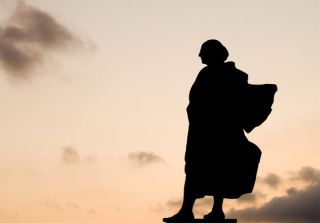 An investigation worthy of a Dan Brown novel has shed new light on the voyages of John Cabot, the Italian navigator and explorer, revealing that he may have had knowledge of European expeditions to the "New World" that predated Christopher Columbus's 1492 voyage.

Although commonly credited with "discovering" America, Christopher Columbus would not reach the mainland of the New World until 1498, when he sailed to South America.

Farther north, Cabot became the first European since Leif Ericson and the Vikings to land on North American soil when he made three voyages for England's Henry VII between the summers of 1496 and 1498. The second of hese expeditions, carried out in 1497, resulted in the European discovery of North America -- at Newfoundland.

Now a brief entry in a yellowed accounting ledger has revealed an unexpected European dimension to Cabot's discovery: In April , the Italian-born explorer received financial backing from an Italian bank -- the Bardi banking house in London.

The notation -- found through some serious sleuthing of the works of Alwyn Ruddock, a deceased, secretive historian -- would also suggest that Europeans may have discovered the New World decades before both Cabot and Columbus set sail.

Found in a private Florentine archive, the document records that a payment of 50 nobles sterling was made to "Giovanni Chabotte" (John Cabot) of Venice so that he could undertake expeditions "to go and find the new land."

"This brief entry opens a whole new chapter in Cabot scholarship. It shows that the Bristol voyages were part of a wider network of Italian-supported exploratory enterprises," historian Francesco Guidi-Bruscoli, of the University of Florence, told Discovery News.

NEWS: Columbus May Have Found Syphilis in The New World

Guidi Bruscoli, who detailed his finding in the scholarly journal Historical Research, noted that the short entry referred to "the new land" ("il nuovo paese" in the original Italian version) and not to "a new land" (or "un nuovo paese").

"The use of the definite article ('il' - 'the') rather than the indefinite 'a' ('un' in Italian) is indeed puzzling," Guidi Bruscoli said.

The phrasing might imply that the money was given to Cabot so that he could find a land whose existence was already known. The Bardi, far from being disinterested patrons, would have had a sound economic reason to finance what would have been an almost certain discovery.

Since Cabot's royal patent only applied to lands "unknown to Christians," it seems unlikely that " the new land" referred to here was that which Columbus had found four years earlier.

As such, the note may revive claims that Bristol merchants had discovered North America at an earlier time.

"Unfortunately, we only have clues. While the entry implies that the Bardi believed in a prior discovery, we can't assume this had occurred," Guidi-Bruscoli said.

The speculation receives some support, however, from a letter written in the winter of 1497/8 by an English merchant named John Day to the "Lord Grand Admira" almost certainly Christopher Columbus.

Discovered in the 1950s, the letter discussed Cabot's recently completed 1497 voyage to Newfoundland, adding it was "considered certain" that men from Bristol had already "found and discovered in the past" the said land, "as your lordship well knows."

Even more compelling evidence appeared to have existed in the archives investigated by the late historian Alwyn Ruddock, a leading expert on the Bristol discovery voyages.

According to University of Bristol historian Evan Jones, Ruddock made finds that "promised to revolutionize our understanding of Europe's engagement with North America in the three decades after 1492."

She claimed, for instance, to have found proof in Italian and Spanish sources that Bristol merchants reached the New World sometime before 1470, and that Cabot didn't die on the 1498 expedition as widely believed, but returned to England in 1500.

"She had made some extraordinary finds, but she ordered in her will the destruction of all her research following her death," said Jones, who founded the Cabot Project research initiative.

That was done in 2005, when the fiercely secretive Ruddock died aged 89. Her unpublished work -- 78 bags of notes, letters, photographs, and microfilms -- ended up in a shredder.

Another of Ruddock's claims was that Cabot was financed by an Italian bank. Following an invitation to visit the deceased historian's house in 2010, Jones and his co-researcher, Margaret Condon, discovered the source of her information -- in the form of a sticky label on an old shoe cupboard: "The Bardi firm of London" (an Italian bank).

"The Bardi firm of London -- that was all we needed to work out the identity of the Italian banking house that Ruddock kept secret for almost half a century," Jones said.

Jones and Condon contacted Guidi-Bruscoli in Florence, who was then able to locate a brief entry in the private archive of the Guicciardini family.

"Without Ruddock's sticky label, finding that small entry would have been a rather difficult task," Guidi Bruscoli admitted.

Meanwhile, Jones and his associates continue their investigation into Ruddock's secret findings.

"I have an enormous respect for Alwyn Ruddock as a scholar. But I can't respect her decision to destroy all her work. She did what is the antithesis of everything that historical research is about -- she sought to destroy all her findings. I can't and don't accept that," Jones said.