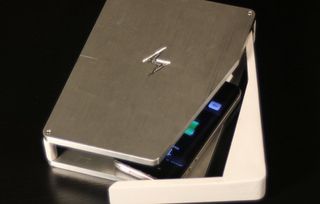 A past prototype of the PhoneSoap charger that uses UV light to kill bacteria on smartphones.
(Image: © PhoneSoap | Wesley LaPorte & Dan Barnes)

Smartphones have become vile breeding grounds for bacteria and viruses far worse than anything living on your toilet seat. Luckily, the new "PhoneSoap" device offers to sterilize invisible scum with ultraviolet light while simultaneously charging your phone.

Such microscopic threats can easily multiply to make phones filthier than office workstations or toilets, because many people rarely bother to even wipe down their phones every now and then. PhoneSoap only requires smartphone users to plug their phones into its closed boxy container — a clever way of piggybacking on existing phone-charging habits.

PhoneSoap's box supposedly uses top and bottom ultraviolet-C, or germicidal, lighting to kill off any bacteria and viruses clinging to a phone's surfaces within three to five minutes. Past studies have found that phones can attract everything from fecal (poop) bacteria to nastier hospital strains of bacteria resistant to antibiotics.

The $39 device has already raised $35,315 on Kickstarter — a crowd-funding website that only funds projects with donations if they hit a certain goal. Most online donors went for the $39 price of a single device, but more than 100 people pledged $75 to receive a second PhoneSoap for their loved ones. Either way, their efforts have raised far more money than PhoneSoap's original $18,000 goal.

Clean wipes could probably do the same job of removing germs from your phone, even if Apple and other smartphone companies discourage putting anything liquid near their devices. But PhoneSoap could easily pay for itself over time compared to buying clean wipe containers. They also have the behavioral advantage of not requiring smartphone owners to think about the act of cleaning.

Still not convinced your phone is filthy? PhoneSoap's team members originally didn't believe it themselves. The entrepreneurs ran their own tests by growing bacteria collected from toilet handles, door knobs, toilet seats and cellphones — the icky picture results appear to speak for themselves.