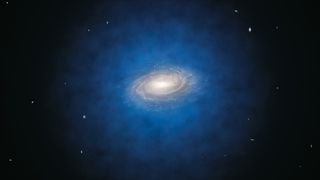 This artist’s impression shows the Milky Way galaxy. The blue halo of material surrounding the galaxy indicates the expected distribution of the mysterious dark matter, which was first introduced by astronomers to explain the rotation properties of the galaxy and is now also an essential ingredient in current theories of the formation and evolution of galaxies.
(Image: © ESO/L. Calçada )

Astronomers mapped the motions of hundreds of stars in the Milky Way in order to deduce the amount of dark matter that must be tugging on them from the vicinity of our sun. Their surprising conclusion? There's no dark matter around here.

As the researchers write in a forthcoming paper in the Astrophysical Journal, the stellar motion implies that the stars, all within 13,000 light-years of Earth, are gravitationally attracted by the visible material in our solar system — the sun, planets and surrounding gas and dust — and not by any unseen matter.

"Our calculations show that [dark matter] should have shown up very clearly in our measurements. But it was just not there!" said lead study author Christian Moni-Bidin, an astronomer at the University of Concepción in Chile.

If the analysis of the data from Chile's European Southern Observatory (ESO) is correct — a big "if," several physicists say — it overturns the decades-old theory that dark matter permeates space in our region of the Milky Way. Dark matter is an invisible material thought to make up 80 percent of all matter in the universe. Although it doesn't interact with light and so cannot be seen, its presence is invoked to explain why the outskirts of galaxies, including the Milky Way, rotate much more quickly than would be expected based on the gravitational pull of visible matter alone. Commonly accepted as fact, dark matter plays an essential role in models of galaxy formation and evolution, and several experiments are under way to detect dark matter particles on Earth.

But if dark matter isn't here in the solar system, it may not be anywhere, because its distribution through the galaxy would have to be extremely peculiar to avoid this region in space. "Modern theories have serious troubles to explain the formation of a [dark matter] halo so curiously shaped," Moni-Bidin told Life's Little Mysteries.

Scott Tremaine, professor of physics at Princeton University's Institute for Advanced Study, said, "If the authors' conclusions are correct, this is indeed a serious blow to dark matter."

Future astronomical surveys, such as the European Space Agency's Gaia mission, will clarify the situation by observing the movements of millions of stars, instead of just hundreds. But in the meantime, by calling dark matter into question, the new ESO finding invites discussion of a topic that hasn't gotten much airtime in recent years: What other theories could account for the rotation of galaxies, as well as other observations explained by dark matter? If not dark matter — or, at least, not the dark matter we expected — then what? Experts have a few other options, though they're not nearly as satisfying.

If the force of gravity is a lot messier than Newton and Einstein thought, then it could account for the speedy rotation of spiral galaxies without requiring dark matter. For gravity to speed up stars on a galaxy's edge, it must deviate from the "inverse-square law" — the rule that gravity decreases by the square of the distance away from something — at galactic distances. In other words, the force would need to suddenly spike at the edge of galaxies. But for it to act that way, gravity fields and the equations associated with them would have to be tremendously convoluted. [Top 3 Questions People Ask an Astrophysicist (and Answers)]

The theory is called "modified Newtonian dynamics," or MOND. "The nicest of the alternative models for spiral galaxies is the alternative gravity theory MOND, as it seems to be able to [mathematically] reproduce the galaxy rotation curves with few assumptions built into it," said Douglas Clowe, an astrophysicist at Ohio University who studies dark matter.

However, MOND doesn't fill as many gaps as dark matter does: it works perfectly only for spiral galaxies, Clowe said. For elliptical galaxies, galaxy groups, galaxy clusters, and larger-scale structures, the theory doesn't quite fit observations, and so it requires that extra matter — i.e., dark matter — be invoked once again. "So instead of just using an undiscovered particle to explain our observations of structures in the universe, MOND requires both an undiscovered particle and a modification to the gravitational-force law," he said.

Another knock against MOND is that it, like the dark matter theory, doesn't match the new ESO findings. According to Moni-Bidin, because the team members used Newtonian gravity in their calculations, MOND would predict a discrepancy to arise in the amount of mass they measured in the solar system. "MOND expects a 'phantom disk' of unseen matter to be detected in a work like ours," he said — just as using Newton's law to model the galaxy leads one to predict dark matter.

John Moffat, a physicist at the Perimeter Institute for Advanced Study in Canada, has proposed a sub-theory of MOND called MOG, or "modified gravity." He claims MOG explains the peculiar motion of galaxies, as well as galaxy clusters and cluster collisions, without invoking dark matter at any scale.

"I take Einstein's gravity and I add to this three fields," Moffat explained. One of the fields has a mass, and this introduces variations in the force law at different distance scales. However, in order to have a mass, the field must have a particle associated with it, which Moffat calls the phion. And, like dark matter particles, the phion's existence has not been verified. [Smart Answers for Crazy Hypothetical Questions]

According to Douglas Spolyar, a dark matter theorist at the University of Chicago, the less massive variety is called warm dark matter. "People use it to explain two things — one that you would have a core in your dark matter profile, so dark matter stays constant inside some radius in the galaxy. Secondly, if you look at the dark matter sub-haloes in the Milky Way, the amounts [of warm dark matter] are much lower," he said. That could explain why the ESO astronomers didn't find any dark matter in our cosmic neighborhood. [What If Our Solar System had Formed Closer to the Milky Way's Edge?]

However, the researchers said that cold dark matter particles are strongly preferred by cosmologists, because less massive dark particles would have problems forming galaxies quickly enough to match astronomers' observations of the early universe.

If future surveys of the motions of stars bolster the ESO findings, strongly suggesting there really is no dark matter in our region of the galaxy, then cosmologists may have to scrap all the current theories and begin anew. "To date, a comprehensive relativistic theory alternative to the dark matter paradigm, able to explain the observations on all scales, from galactic rotation to the clusters of galaxies, is not known," Moni-Bidin said.

Princeton's Tremaine concurred: "I don't think any of the alternatives to dark matter are very likely."