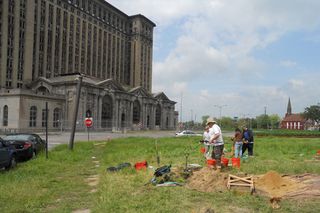 An archaeology excavation near Detroit's abandoned Michigan Central Station. The layers of the soil here held some surprising evidence of the past.
(Image: © Jeffrey Howard)

The exodus of residents from Detroit has left behind vacant lots and derelict buildings. And while abandoned spaces are generally bad news for a city, they offer opportunity for a soil scientist.

"From my point of view it is a blessing," said Jeffrey Howard, an associate professor of geology at Wayne State University in the city. "It's kind of a scary place to do work, but, scientifically, other people are envious of the urban soils we have here."

Unlike natural soils, urban ones are excavated, filled, compacted and generally disturbed, sometimes repeatedly, as years pass. But, again unlike natural soils, urban soils can come with clear timelines, often marked by a date on a building's cornerstone or records at the city clerk's office, that make it clear how long ago a site was disturbed and weathering and other natural processes began their work. [History's Most Overlooked Mysteries]

Pits dug into Detroit's soils have revealed some insights into the evolution of urban soils: Some types of debris are breaking down quite fast, and the disturbed soil often has layers similar to those found in natural environments, though the details vary among the sites. Deeper down, Howard has found the natural past below the disturbed soil.

"Very often, you can see the original, native soil underneath that," he said. "That was one of the surprising things; we started to hit this buried soil."

Since its population peaked at nearly 2 million in 1950, Detroit's census count has plummeted, with only about 714,000 people living there in 2010. A significant portion of the Motor City's 139-square mile (360-square kilometer) expanse is vacant. That has given Howard a lot of soil to examine.

Since the early 1990s, Howard has dug pits at about 10 different sites in the city. He has found that top soil, which soil scientists label as horizon or layer A, can form here within 15 to 30 years, about as quickly as in a recently deluged floodplain or after a volcanic eruption has left the landscape barren.

Urban soil formation doesn't start with a natural catastrophe, it often starts when a building is demolished, most of the debris is carted away and fill dirt dumped onto the site is mixed with nails, bricks and other remaining debris. This becomes the starting point for the new soil, Howard said.

In the early 1990s, Howard dug his first a pit on a nearby vacant lot where city records indicated an apartment building had been demolished in 1979. In the soil's profile, he found mortar left by that demolition rapidly leaching out of the soil.

The rapid rate of the weathering he saw interested Howard, prompting him to dig pits elsewhere to see if the same thing was happening.

While mature, natural soils have a subsoil, or B layer, beneath the topsoil, the urban sites don't have a B layer, which takes much longer to form than the topsoil. There was one exception, however, an "oddball place," Howard said. This was at Roosevelt Park, in front of abandoned Michigan Central Station, a decaying Beaux Arts-style building that hasn't seen a train in decades.

Sprinklers had watered Roosevelt Park's gardens thoroughly until the 1980s, and the abundant plants left behind a thick layer of topsoil. A date stamp on the buried sprinkler system showed when this began: 1916. Lower down in the soil profile, iron leaching from hand-wrought nails, left by the 19th-century houses that occupied the site even earlier, had dyed the park's unusual B layer red.

The nails turned up in soil excavated at Roosevelt Park as part of an archaeological dig in 2011, when Howard collaborated with Wayne State archaeologist Tom Killion. They also uncovered two copper pennies, from 1854 and 1930. All the artifacts show up below the topsoil because over the years earthworms bury the artifacts as they constantly eat soil and excrete it, Howard said.

In this way, Detroit's urban soils are offering insight into the way weathering processes play out on items and in conditions that wouldn't normally turn up in natural spots. Howard's work is profiled in Soil Horizons, a publication of the Soil Science Society of America.