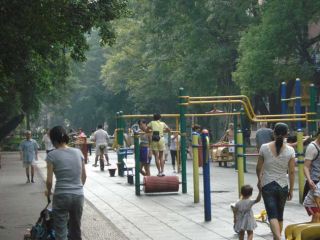 Young and old in an exercise park in Guangzhou, China. The park was packed all day long.
(Image: © Christopher Wanjek)

Guangzhou, China—With all the stories from China about dangerous toys, environmental abuses, crowded and dirty cities and widespread poverty, it's hard to imagine how the Chinese can live to a ripe old age.

How do they do it? Perhaps by stretching, twisting, dancing or otherwise exercising their way to good health en masse.

U.S. and China, by the numbers

The United States has by far the highest level of health spending per capita in the world: nearly $6,100 or 15.4 percent of the GDP, according the World Health Organization. Scandinavian countries, with their universal healthcare coverage, pay less than half of this.

Yet the United States has one of the lowest life expectancies among developed nations, at about 78 years, which is lower than Cuba's and marginally beats Slovenia, according to United Nation's figures.

Meanwhile, China spends only $277 per capita, or 4.7 percent of its GDP, on healthcare expenditures and has on average a life expectancy of 73 years.

Admittedly five years is a big gap, and spending only 4.7 percent of the GDP on health is small compared to other countries, which mostly spend between 5–10 percent. But this life expectancy average absorbs the high infant mortality rate in rural areas. In cities like Beijing and Shanghai, life expectancy is around 80 years, according to the Chinese Municipal Center for Disease Control.

Hong Kong has one of the highest life expectancies in the world, at over 82 years, followed closely by Chinese-ruled Macau, at nearly 81 years, according to the U.N.

If you ever visited China, you might find these statistics unbelievable. Hong Kong, Beijing and Shanghai are filthy, with horrible air quality and tap water that needs to be boiled. Smoke and spit await you at every storefront. You return to your hotel with grimy hands that turn the sink black.

Is it the Chinese traditional medicine keeping people healthy, or something much more preventive?

Traveling through three major Chinese cities—Beijing, the capital; Wuhan, a large, central city near the Three Gorges Dam; and Guangzhou, a metropolis of over 11 million here in the south, near Hong Kong—one unifying feature has become readily apparent: Every morning and every night there are people, particularly older folks, thousands of them, who gather publicly to exercise.

As I walk the streets, I see one group practicing tai chi; another group is wrapped up in some hybrid form of line dancing and aerobics; circles of four to six people play a Chinese version of hacky sack; others meet for ballroom dancing.

These cities all have outdoor fitness areas, too, with chin-up bars and enticing exercise contraptions that are actually used. There seems to be no end to the number of people and the number of activities.

The United States has its joggers, bikers, skaters and punks racing away from cops. There's no shortage of exercising here, particularly since the jogging revolution in the 1970s.

In China's big cities, however, exercising seems more widespread and woven into the culture. The social interaction seems to be as important as the calories burned and the joints lubricated. Most heartening is the number of older people out and about, fighting the isolation that often comes with old age in the United States.

Could it be that public exercise, as common as tea drinking here, helps ward off the cancers, strokes and organ diseases that surely would come from living in a polluted city? My sense is that if more Americans got out and just moved, we'd spend less on treating diseases and bump up our life expectancy to a level worthy of a civil society.