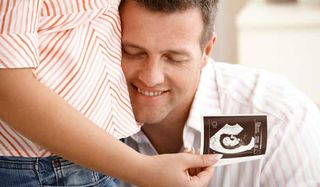 The percentage of babies born to unmarried couples who are living together is rising, according to a new government report.

From 2006 through 2010, the Centers of Disease Control and Prevention reported, 22 percent of women who gave birth to their first child were cohabiting with their partner, compared with 12 percent in 2002.

In fact, nearly half of all births that take place outside of marriage were babies born to cohabitating couples, the CDC said.

Births outside of marriage are rising in general: 46 percent of first births to women ages 15-44 occur outside marriage, up from 38 percent in 2002, the report said.

The increase is concerning from a public health perspective, the CDC added. A large proportion of births outside marriage are not planned, and "children born outside of a marital union experience more family transitions, less stability, and may have fewer resources," the report said.

The average age for first-time parenthood was 23 for women and 25 for men, the same as in 2002, the report said.

Eighty-five percent of women had given birth by the time they were 40, and 76 percent of men had fathered a child, the report said. Women averaged two children by age 44.

Pass it on: The percentage of women who have their first child outside of marriage, but during cohabitation, is rising.