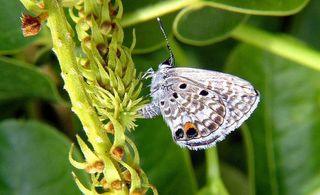 A small blue butterfly that lives along the Florida coast is the latest addition to the Endangered Species List, federal officials announced this week.

Unlike monarch butterflies, known for their harrowing migrations, Miami blues spend their lives in just one area.

The Miami blue's range once extended from the Dry Tortugas, at the tip of the Florida Keys, as far north as St. Petersburg on the state's western coast, and Daytona Beach on the eastern coast.

Now the butterflies are found on only a handful of remote islands within the Florida Keys. Only a few, small populations are known to remain, according to a statement from the U.S. Fish and Wildlife Service (USFWS).

Coastal development and spraying for mosquitoes caused a big drop in the Miami blue butterfly population in the 1970s. In the early 1990s, after Hurricane Andrew swept across the state, some researchers thought the butterfly had gone extinct.

In 1999, a photographer discovered a small colony of the butterflies living in Bahia Honda State Park in the Florida Keys, but by 2003, only 50 individual butterflies remained, according to a 2004 news release from the University of Florida.

Since then, a smattering of small populations has survived.

In August 2011, the butterflies were given an emergency listing under the Endangered Species Act (ESA), but the protections lasted for only 240 days.

This week, the Miami blue was given permanent protection with a formal listing under the ESA.

"Under the ESA, it is illegal to kill, harm or otherwise 'take' a listed species, or to possess, import, export or engage in interstate or international commerce of a listed species without authorization in the form of a permit from the Service," according to a statement from the USFWS.

The listing means that federal agencies are required to minimize their impact on the butterflies. It also encourages conservation efforts by public and private institutions as well as individuals.