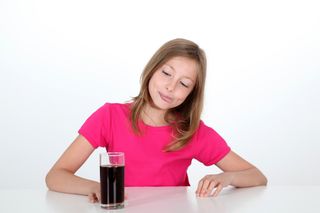 The best way for parents to reduce the amount of soft drinks their young children drink is to not serve it with meals, a new study suggests.

The findings from researchers in Belgium showed that children from higher-income families drank less than half — about 42 percent — as much soda as children from lower-income families. However, the vast majority of the difference between the income groups could be explained by three parenting practices: not offering soda at mealtimes, not letting kids drink soda whenever they want, and not keeping soda in the house, according to the study.

"Parents have a great influence through the food they make available and accessible to the child, their own nutritional behavior and by child-feeding practices," the researchers wrote in their study, published online April 1 in the journal Appetite.

Reducing the amount of soda kids drink is important, the researchers say, because sugary beverages have been linked with obesity and Type 2 diabetes.

What works, what doesn't

Researchers based their findings on questionnaires completed by 1,639 parents of children ages 2  to 7.

"It makes sense that the home environment and home 'policies' or limits related to soft drinks will have the biggest impact," on soda consumption, said Kate Dickin, a nutritional science research at Cornell University who was not involved in the study. "Our behavior is very strongly influenced by our environments," Dickin said.

The study also revealed that telling children of this age that soda is unhealthy, and refraining from drinking soft drinks in front of them, are unlikely to make a difference.

"Although modeling and explaining why foods are unhealthy can be important, not having any soda in the house or on the table is clearly the most effective way to prevent consumption," Dickin said. If the soda is right there, it’s a lot harder to for parents — especially tired, stressed or distracted parents — to say "no," she said.

The study was limited in that it was conducted with a specific group of parents, and relied on their reports of their own behaviors and how much soda their kids drank.

How to make healthy choices appealing to kids

Dickin said it's helpful when parents understand how to create a home environment that offers kids healthy choices.

"Young kids respond well to simple ways to make a healthy beverage seem special — a pretty cup, a citrus slice, or a drinking straw. Healthy eating is enjoyable and can be presented that way — to parents and to children," she said. "Framing it in terms of restriction and deprivation gets us nowhere."

Dickin said that by looking only at soft drink consumption, the study might have missed part of the picture of what kids are drinking. "Replacing soda with other sugar-sweetened beverages doesn’t help, so it would have been useful to know about all sweetened drinks."

Still, "it’s great to have more evidence of the importance of shaping the home environment as a means for parents to influence child behaviors," Dickin said. Cornell offers an education program for lower-income families focused on learning to make healthier choices.

"We hear back from a lot of parents that these approaches are really effective," Dickin said.

Pass it on: Reducing the amount of sodas children drink is crucial to preventing Type 2 diabetes and obesity.