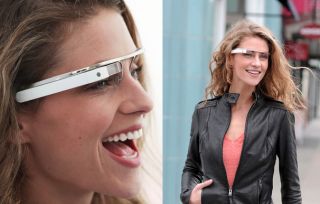 Google seems tired of everyone staring at their smartphone screens all the time as they sit, walk or drive. It has officially unveiled its vision for glasses that put all the convenient features of a smartphone right in front of the wearer's eyes.

There's no actual product just yet, but Google engineers shared the possibilities for such technology in a new video on their "Project Glass" website. The video follows the imaginary day of a young New York City resident as he gets calendar reminders to meet a girl, receives step-by-step Google Maps directions to meet a friend, and speaks voice commands to his Google glasses to share photos with his online social circle or to schedule a meet-up.

"We're sharing this information now because we want to start a conversation and learn from your valuable input. So we took a few design photos to show what this technology could look like and created a video to demonstrate what it might enable you to do," the Google team explains.

Google's vision includes some augmented-reality concepts for how the glasses could present information about what the wearer sees. The Google glasses wearer in the video gets a temperature check and weather forecast just by looking out the window, and he receives an automatic alert about a closed subway line as he approaches the entrance. (Actual wearers might appreciate such alerts more if they were issued before the wearer took the trouble to walk to the subway.)

The imaginary glasses wearer also confirms his hipster status by asking the glasses to find the music section inside the city's famous Strand Book Store, buying a book about playing the ukulele and then playing it for his girl during a live video chat on top of a New York City rooftop at sunset.

Google's current design for such life-enhancing frames features a thin banded display in front of the right eye; it seems to combine a futuristic sensibility with an urban chic style. But if Google can put such technology inside even ordinary glasses, people without the need for eyesight correction might find a reason to wear them.