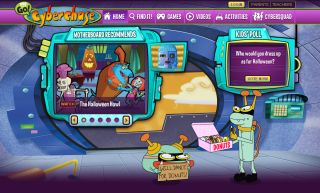 "Cyberchase" is a mathematics-focused show and website, here is its Homepage.
(Image: © THIRTEEN/WNET)

Kids love their cartoons. When they grab a bowl of cereal, jump onto the couch and spend hours engrossed in animated "edutainment," they're being entertained — but are they being educated?

Research shows that the viewers of the PBS KIDS GO! math mystery series "Cyberchase" actually are learning important math concepts and gaining other benefits when watching the show.

Nine years of research has gone into making "Cyberchase" an effective educational media project, and right from the start, research played a key role in shaping the show — a committee of math education researchers and math teachers helped to develop the content. The show's creators chose math topics based on particular learning needs for the target age group, kids aged 8 to 11, and each episode was peer reviewed.

Over the years, four independent studies involving more than 1,500 girls and boys of differing backgrounds and ages provided evidence that "Cyberchase" fosters positive attitudes about math, acquisition of math skills and knowledge and confidence in problem solving.

Most recently, a three-year research project funded by the National Science Foundation showed the cumulative impact of "Cyberchase" as a multimedia venture (including TV, a website with online games and activities, and outreach). This independent study was the first to explore children's learning from multiple media platforms and the unique benefits that arise from using different media in combination.

Conducted by MediaKidz Research & Consulting, Indiana University and Michigan State University, the study found that users of "Cyberchase" media showed significantly greater gains in math problem-solving performance than non-users. Best of all, children were able to transfer what they learned from one medium while continuing to learn from the next. The findings indicate the added benefits of learning from more than one medium when they are designed to be complementary.

"Cyberchase,"which received funding from the National Science Foundation's Informal Science Education Program, is an Emmy Award winning television program. Created by THIRTEEN for WNET New York Public Media"Cyberchase" has a recurring cast of characters: The dastardly Hacker is out to overthrow Motherboard and take over cyberspace with the help of his blundering henchmen, Buzz and Delete. But Motherboard enlists the help of three Earth kids, Inez, Jackie and Matt, and their cyberpal, Digit, to stop him. Their only weapon: Brain power.

With a cast that includes Gilbert Gottfried and Christopher Lloyd, the suspense in each episode keeps kids glued to the screen. (Other stars who have lent their voices to "Cyberchase" include Jasmine Guy, Bebe Neuwirth, Philip Bosco and Al Roker.)

"Cyberchase's" young heroes use math and problem-solving to foil Hacker and save the day. Each character brings his or her own strengths in math to the team, and therefore acts as a role model for young viewers. Digit even surprises himself with his own mathematical abilities, showing viewers that everyone can do math.

It's a good versus evil story, but the power of a narrative embedded with mathematical elements helps instill an enthusiasm for math in young viewers. "'Cyberchase' For Real," a live-action segment that ends each episode, shows how math is important in everyday situations. Viewers learn about money management, how math is linked to the process of invention, and even the connection between math and weather.

It's not all about television

"Cyberchase's" recently revamped site is one of the largest math resources for kids on the web, offering all 94 episodes (some translated into Spanish), 400 videos and more than 100 math games and activities. The site attracts more than 1.25 million unique visitors per month.

The website customizes the experience for each visitor, offering recommendations for new math tasks based on what areas children have visited before. There are printable activities, immersive "Quest" games that offer character-driven math adventures, and a FIND IT! page where users can select topics such as fractions and geometry.

On the "Cyberchase" homepage, users vote in polls and see the results in pie charts and tables, a feature that gives kids the chance to analyze their user-generated data.

"Cyberchase's" content aligns with standards for grades 3 through 5 of the National Council of Teachers of Mathematics, which cover topics such as percentages, mixed-number fractions, geometry, algebra, mathematical modelling, data analysis and probability.

Parents and teachers can access lessons and activities and 'Explore Math With "Cyberchase"' on the website. "Cyberchase" clips with associated math topics and standards are also available from PBS LearningMedia, and the Lucky Star game is available as an application that teachers can use in the classroom.

"Cyberchase" also reaches underserved children by distributing materials through museums, libraries, after-school programs and other organizations that bring science, technology, math and engineering to the public.

The program also offers teacher's guides, "Cyberchase" comics and activity kits with the help of partners such as Girls Inc., Boys & Girls Clubs, National Association for Girls and Women in Sports, the National Engineers Week Foundation and even the New York Mets. In 2011, the first-ever "Cyberchase" Girl Scout patch debuted.

There is also a bilingual 1,500-foot museum exhibit, "Cyberchase" — The Chase is On!,touring the country and permanently installed at the Children's Museum of Houston, Texas, which developed it.

In the future, "Cyberchase" is planning a web and mobile spin-off starring Buzz and Delete, to be launched later this fall. There's already a Math Match iPhone app, and soon THIRTEEN and Ruckus Media Group will be producing storybook apps as well.

Editor's Note: The research depicted in Behind the Scenes articles has been supported by the National Science Foundation, the federal agency charged with funding basic research and education across all fields of science and engineering. Any opinions, findings, and conclusions or recommendations expressed in this material are those of the author and do not necessarily reflect the views of the National Science Foundation. See the Behind the Scenes Archive.