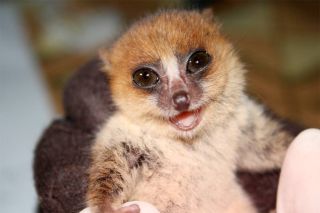 A brown mouse lemur. By tracking the lice that infect them, scientists came to better understand how these shy, nocturnal primates interact with each other.
(Image: © Sarah Zohdy)

Blood-sucking lice have revealed a few of their host's secrets. Scientists interested in the big-eyed, nocturnal brown mouse lemur turned to their lice to better understand this primate's social interactions and to see how the parasite spread among them.

One of the smallest primates on the planet, the brown mouse lemur is infected by a parasitic louse called Lemurpediculus verruculosus. The louse is only known to infect the lemur and cannot survive long off of lemur skin.

In the rain forest of Madagascar, researchers caught lemurs and the lice living on them. On the lice, they painted a series of colored dots in nail varnish to identify lice living on an individual lemur's ears. Later, they recaptured the lemurs to see if the lice had moved and to whom, revealing evidence of the habits of these difficult-to-study creatures. [Photos: Wacky Madagascar Animals]

They tracked 76 transfers between 14 animals — all males — over the course of four weeks, a remarkably high rate of lice sharing that coincided with the breeding season. This may have been a result of more conflicts among males over females, according to the researchers.

There was no relationship between the age of a male lemur and his role in lice sharing.

"The youngest male in the study had the worst louse infestation, but only donated one louse, indicating a low number of interactions, while the eldest male, who also had a heavy infestation, appeared to be more sociable, collecting lice from many donors," said lead researcher Sarah Zohdy from the University of Helsinki in a press release issued by journal publisher BMC Central. "Other males appeared to be 'superspreaders' donating but not collecting lice"

The pattern of lice sharing also revealed that the lemurs traveled much greater distances and interacted over a wider area than thought, Zohdy and colleagues concluded.

The lice-painting approach they used has the potential to help researchers get a better handle on social interactions and parasite exchange among other elusive, lice-infected species, they write in a study published online Monday (March 26) in the journal BMC Ecology.