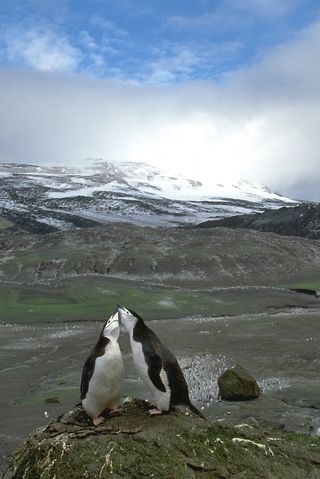 As the Antarctic Peninsula warms, penguins that live in the area year-round have a breeding advantage over birds that migrate in.

Gentoo penguins live on the Antarctic Peninsula year-round, and their numbers are increasing while migratory chinstrap and Adelie penguins are dwindling in the area. New research by Stony Brook University researcher Heather Lynch reveals that gentoo penguins have adapted to warmer temperatures faster than the other two species.

Using field work and satellite imagery, Lynch and her colleagues tracked colonies of the three penguin species. They found that warming temperatures triggered penguins to lay their eggs earlier in the season than normal. Gentoos are able to adapt more quickly because they're locals, the researchers found. Adelie and chinstrap penguins aren't aware of the local temperatures until they migrate into the area, meaning they can't shift their breeding as dramatically.

Gentoo penguins may also have an advantage because they prefer areas with less sea ice than chinstrap and Adelie penguins. The latter two species rely more on ice-loving krill as their food source. A long-term study of penguins published in 2011 in the journal Proceedings of the National Academy of Sciences found that krill density is down as much as 80 percent since the mid-1970s. Krill depend on algae growing on sea ice for food.

Also in 2011, researchers reported that a small colony of West Antarctic Peninsula emperor penguins had disappeared in 2009 after about three decades of stability. Warming is also bringing other changes to the southernmost continent, including colonization by king crabs.

Lynch published her results in the journals Polar Biology, and Ecology and Marine Ecology Progress Series and will present her work at a Stony Brook University workshop for educators on April 10 and 11.