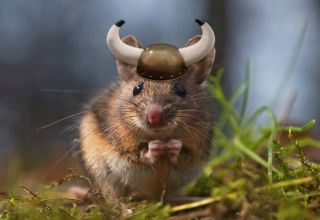 Viking Invader? A new study finds that mice stowed away on Viking ships to make it to Iceland and Greenland.
(Image: © Mouse photo by CreativeNature.nl, Viking hat by ueapun, Shutterstock)

Between the eighth and 10th centuries, Vikings were exploring and spreading into Greenland, Iceland and Newfoundland. Now, a new study finds that these notoriously fierce people brought with them some fluffy stowaways: house mice.

Vikings appear to have brought the house mice with them when they arrived in Iceland and Greenland, according to a genetic analysis of the tiny rodents. The descendents of these Viking mice can still be found today in Iceland, though the Greenland mice died out and were replaced by their Danish cousins.

"Human settlement history over the last 1,000 years is reflected in the genetic sequence of mouse mitochondrial DNA," said study researcher Eleanor Jones of the University of York and Uppsala University in a statement, referring to DNA found in mitochondria, or the energy-producing centers of cells. "We can match the pattern of human populations to that of the house mice."

Like many explorers, Vikings brought along livestock on their expeditions. On such journeys, uninvited tagalongs are inevitable. Jones and her colleagues conducted genetic testing on modern mice in Iceland, Greenland and northwest Newfoundland where Vikings are known to have explored. They also tested old mouse bones found at archaeological sites in Greenland and Iceland.

They found that the house mouse subspecies Mus musculus domesticus showed up in Iceland from Norway or the North British Isles in the 10th century — matching the time period of the Vikings' arrival. From there, the Vikings and their mice went to Greenland. [Gallery: Invasive Species]

Today, the descendents of these Viking mice are still found in Iceland. But for reasons unknown, Mus musculus domesticus would later die out in Greenland, the researchers report Monday (March 19) in the journal BMC Evolutionary Biology. Today, the mice in Greenland are Mus musculus muscularis, a subspecies that likely came from Denmark during expeditions after A.D. 1500 or later, after the country colonized Greenland in the 1700s.

The researchers found no evidence of Viking mice in Newfoundland, despite the likely presence of a Viking settlement there around A.D. 1000. It's possible that the Vikings did inadvertently bring mice to the area, the researchers suggest, but the mice may have died out when the Vikings moved on. Mice can sometimes survive in wild populations, the researchers wrote, but they often depend on human villages or cities as their habitat. Today's Newfoundland mice are a subspecies that spread all across the world during the 1700s on British sailing ships.