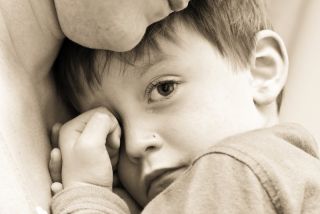 The effects of meth exposure in the womb can stretch into childhood.
(Image: © Tom Gowanlock, Shutterstock)

Studies of children who had been exposed to methamphetamines in the womb suggest  the drug can stunt fetal growth, increase newborn stress and cause problems with motor development. Now new research reveals that meth takes a toll on a child's mood and behavior, as well.

The new research is part of a study that tracks the babies of meth-using mothers starting at birth. Children exposed to meth in the womb are more likely to suffer from anxious and depressed moods by age 3, the researchers found. And at age 5, meth-exposed kids are more likely to "act out" behaviorally and show symptoms of attention-deficit/hyperactivity disorder (ADHD).

These mental-health findings are alarming, because behaviors seen at these young ages tend to persist, said study researcher Linda LaGasse, an assistant professor of pediatrics at Brown University.

"It isn't just about 3 to 5, it's setting the groundwork potentially for the future unless something interrupts it," LaGasse told LiveScience.  [10 Tips for Raising Happy Kids]

Methamphetamines, sometimes known as speed or ice, are stimulants that create a feeling of energy and euphoria. According to an estimate by the Substance Abuse and Mental Health Administration in 2009, some 1.2 million Americans over the age of 12 had used meth at least once that year.

Using data from the Infant Development, Environment and Lifestyle study, which had recruited new mothers and their babies in Los Angeles, Honolulu, Tulsa, Okla., and Des Moines, Iowa, the researchers examined the behaviors of children who had been exposed to meth in utero. Mothers reported whether they'd taken meth during pregnancy, and the babies' first stools were tested for signs of meth exposure. At follow-up interviews when the children were 3 and 5 years old, the caregivers responded to questions about the children's behaviors and moods.

The study has the advantage of being from a community sample, not from women seeking help in clinics, LaGasse said. That means the women in the study are likely more representative of meth users in general. In addition, the 204 meth-exposed babies in the sample were matched with babies who had not been exposed to meth but were similar in other characteristics, including age, birth weight, insurance status and mother's education.

At 3 years old, the children exposed to meth in the womb seemed no different from unexposed children in measures of so-called "externalizing" behaviors. These are acting-out behaviors such as bullying and other forms of aggression, and restlessness and other behaviors linked to ADHD. But by age 5, the unexposed children were maturing and showing fewer acting-out behaviors. The meth-exposed kids, on the other hand, seemed to be in a state of arrested development.

"It's like they don't make that transitional step," LaGasse said. "They're not getting worse, they're just staying."

The researchers are following up with these children to find out whether they have lost this ability to control these behaviors or if it is just delayed. But of even more concern, LaGasse said, is what the researchers found out about "internalizing" behaviors, or mood problems such as anxiety and depression. Kids exposed to meth before birth had a higher rate of these problems than unexposed kids at age 3, and that difference persisted to age 5.

"That's actually very worrisome, and why it's so worrisome is that this kind of behavior can slip through the net," LaGasse said. "It's not disruptive, it's not going to be as upsetting to parents. … It’s not going to come up as much in a pediatric visit."

The good news, LaGasse said, is that young children aren't set "hard and fast" in their ways. Early mental-health and parenting interventions have the potential to interrupt the path that meth put these children on.

"This is an opportunity," LaGasse said. "The importance here is catching these things early and redirecting the trajectory of this child."