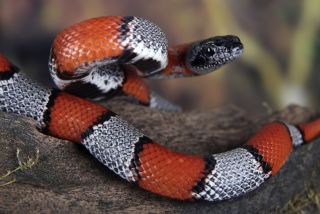 How fast did you notice this grey-banded kingsnake? For women, the answer may depend on the menstrual cycle.
(Image: © erllre74, Shutterstock)

Dwight Schrute would be jealous: A new study suggests that women can detect snakes faster during the premenstrual phase of their menstrual cycles.

The quirky character on the sitcom "The Office" has plenty of theories about both snakes and menstruation, including a color-coded chart for the cycles of his female co-workers, but even he didn't see this one coming. Study researchers say the idea makes sense, as fluctuating hormones can influence the amygdala, a brain region responsible for fear and anxiety.

During the luteal phase, or premenstrual portion, of the menstrual cycle, women are quicker at detecting photos of snakes, a threatening stimulus, than they are during the early and late follicular phase of the cycle, when the ovaries prepare to release an egg.

The luteal cycle begins with ovulation, the time of maximum fertility, suggesting that heightened anxiety might be adaptive in helping pregnant or potentially pregnant women stay safe, researchers report today (March 8) in the Nature journal Scientific Reports. The luteal phase is also the time when some women experience premenstrual syndrome, or PMS, an array of symptoms that can include everything from breast tenderness to irritability to anxiety.

The study is preliminary, and women's cycles were calculated based on the dates participants gave for their last periods, not on direct hormone measurements, meaning further research is necessary to confirm the results.

In the study, Kyoto University Primate Institute researcher Nobuo Masataka and his colleague, Masahiro Shibasaki, asked 60 healthy, naturally cycling women ages 29 to 30 to look at grids of nine photos and to touch the photo in each grid that contained a snake. The other photos were of flowers, a neutral, non-scary image. In general, people are quicker to react to scary snakes than they are to pleasant flowers. [7 Shocking Snake Stories]

Each woman completed the experiment twice over two to three months. Twenty women participated during the early follicular phase of their cycle, or the fifth day after the start of the menstrual period, and during the late follicular phase, or the 25th day of the cycle right before ovulation.

There was no difference in snake-detecting ability between the early and late follicular phases.

Citing other hormonal studies, the researchers speculate that heightened levels of the hormone progesterone could increase anxiety. This hormone is particularly high in the luteal phase of the cycle. Other hormones, including estradiol and cortisol, also vary with the menstrual cycle and could play a role in this increased awareness of danger, the researchers wrote.