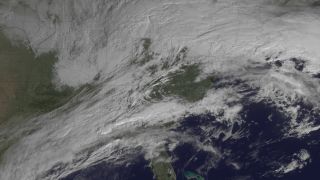 The storm that the Chicago area is grappling with today has a name more befitting a professional wrestler: The Saskatchewan Screamer.

In a break from the nation's wimpy winter weather, a nasty snowstorm has snarled traffic in Chicago today (Feb. 24). The storm is similar to what's called an Alberta Clipper, a fast-moving low-pressure system that sweeps southeast out of the Canadian province of Alberta through the Plains, Midwest and Great Lakes region usually during the winter, according to the National Ocean and Atmospheric Administration's definition. Light snow, strong winds and colder air usually accompany this low-pressure area.

The Saskatchewan Screamer is basically the same kind of storm, with one difference.

"It's the same except it originates from Saskatchewan," said Amy Seeler, a meteorologist with the National Weather Service in Romeoville, near Chicago.

Clippers are named after the fast-moving ships of the 19th century. When these storms blow in, they can dump snow on the central Canadian provinces and the Upper Midwest and Great Lakes regions of the United States.

The storm has dropped up to 4 inches (10 centimeters) of snow on the Chicago area. More than 100 flights were canceled at Chicago's O'Hare International Airport this morning.

The weather in Chicago is not all that cold, with temperatures in the mid-30s Fahrenheit (low single digits Celsius) forecast for most of today.

Clippers such as this one are common from December to February, but they can also strike in November.

Clippers form when warm, moist winds from the Pacific Ocean blow over the mountains in western Canada. The winds then develop into a storm over the Canadian prairies when they hit the cold winter air there. The storm then moves south and gets caught in the jet stream, shooting the wild weather into the Midwest.

So, what do you call a clipper from Manitoba? A Manitoba Mauler, of course.