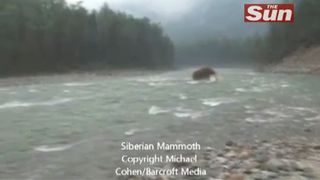 Last week, a new video surfaced claiming to show a live woolly mammoth — an animal scientists think has been extinct for at least four millennia — crossing a river in Russia. The suspiciously blurry footage was allegedly "caught by a government-employed engineer last summer in the Chukotka Autonomous Okrug region of Siberia," according to a story in The Sun newspaper.

While most people didn't believe that the animal in the video was really a woolly mammoth as claimed, viewers were sharply divided about what exactly it was.

Some suspected the video is an outright hoax — a computer-generated mammoth digitally inserted into a real river scene. Many others, however, were convinced that the animal was real: not a mammoth, but instead a bear with a large fish hanging from its mouth. That would explain its relatively small size, the shape of the "trunk" on its head, and the color. Experts cast doubts on the video's authenticity; Derek Serra, a Hollywood video effects artist, concluded that it "appears to have been intentionally blurred."

Serra isn't the only expert who can shed some light on this mystery: another person is Ludovic Petho. His name may not be familiar to most people, but his work has been seen by millions; he filmed themammoth footage at the Kitoy River in Siberia's Sayan Mountains in the summer of 2011.

He's not an anonymous government engineer, but instead a writer and videographer. Petho filmed the river scene during a 10-day solo hike in the mountains as part of a video project he's working on about his grandfather's escape from a Siberian POW camp in 1915 and his walk across Siberia to Budapest, Hungary. The footage may end up being used in a documentary film — but there's one big difference between the video he shot and the woolly mammoth video.

"I don't recall seeing a mammoth; there were bears, deer, and sable," he said in an interview with Life's Little Mysteries. "But no woolly mammoths. I had no idea my footage was used to make this fake sighting." Petho noted that his original video had been available on YouTube since July 2011, depicting an exactly identical scene — minus the faked woolly mammoth, of course.