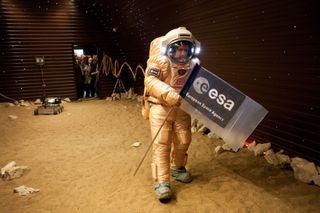 Crew training for 'Marswalk' at the simulated martian terrain of the Mars500 experiment. The terrain, about 10 m long and 6 m wide, is covered with reddish sand and is built to resemble the surface at Gusev crater.
(Image: © ESA/ IPMB)

If you've ever dreamed of becoming an astronaut and have four months to spare, you might have the "right stuff" to fly to Mars … well, sort of.

Scientists at Cornell University studying how best to feed Mars-bound astronauts during their long space trip to the Red Planet have dreamed up a mock mission to see how appetites and food preferences can change over time. The researchers are looking for six volunteers to live and work like astronauts for four months inside a faux space capsule in Hawaii.

While what's on the menu may not seem like one of the biggest scientific challenges facing a manned mission to Mars, it is actually more complicated than it looks.

Astronauts tend to tire of the same-old, same-old when it comes to food, said Jean Hunter, professor of biological and environmental engineering at Cornell University, a leader of the simulated mission.

"They not only tire of eating foods they normally enjoy, but also tend to eat less, which can put them at risk for nutritional deficiency, loss of bone and muscle mass, and reduced physical capabilities," according to a Cornell statement. [Space Food Photos: What Astronauts Eat]

The project, called the Hawaii Space Exploration Analogue & Simulation (HI-SEAS), will begin in early 2013 on Hawaii's big island. After a successful mission, the participants will be paid $5,000 plus travel and expenses. The deadline to apply is Feb. 29.

During the simulated mission, the volunteer "astronauts" will eat a mix of instant foods as well as meals they cook for themselves from shelf-stable ingredients. They will then rate all their meals, and fill out daily surveys about their mood state, personal health and body mass.

The researchers will track the volunteers' enjoyment of their food options, and any changes in their preferences over time. They will also measure how much time, power and water is required to prepare different meal options, and build up a database of recipes and cooking tips for the first humans to make the trip to the Red Planet for real.

"The major disadvantage of cooking on a space mission is the cost of resources required for food preparation and cleanup: equipment, power, water, and crew labor," according to the study's website. "Crew time spent on housekeeping, maintenance, and food related tasks is not available for the mission’s exploratory or scientific goals."

The mock astronauts will be able to communicate to the outside world only through time-delayed electronic means, and must gear up in simulated spacesuits whenever they leave their facility.

Hunter and her colleagues, Bruce Halpern of Cornell and Kim Binsted of the University of Hawaii at Manoa, hope to attract highly educated volunteers, such as scientists and engineers, "with the enticement of working on their own personal research projects while in Hawaii," according to a statement. Participants must have bachelor's degrees, plus some graduate school experience, in science or engineering.

The upcoming Hawaii sojourn is not the first fake space mission to be conducted for research purposes.

In November 2011, six volunteers emerged after spending nearly a year and a half inside a mock Mars space capsule on the joint European/Russian Mars500 mission. The 520-day trial cost $15 million and marked the longest spaceflight simulation ever conducted. It was undertaken to study the physical and psychological ramifications of being confined to a small space with the same people for an extended time.

NASA also routinely sends astronauts down under the sea to conduct ocean voyages that double as simulated spaceflights. NASA's Extreme Environment Mission Operations, or NEEMO, project has sent 15 multi-day missions down to an underwater laboratory 60 feet (18 meters) below the Atlantic Ocean.

Space agencies around the world have also been known to send spaceflyers in training out to deserts, deep into caves, and into the frozen wasteland of Antarctica to prepare them for the challenges of actual spaceflight.

For details on how to apply to the Hawaii Space Exploration Analogue & Simulation, go here: http://www.hawaii.edu/news/2016/08/10/hi-seas-recruiting-for-mars-simulation-missions/.