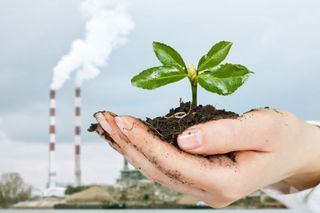 Disclosing information regarding their environmental practices may be more beneficial to a company's reputation than their actual environmentally friendly performance, a new study shows.

This unexpected benefit of information disclosure may reduce a corporation's incentive to improve environmental performance in the future, researchers warn.

Researchers analyzed a cross-sectional sample of 92 firms that were listed in Newsweek magazine's 2009 ranking of the 500 "greenest" U.S. companies, including corporations from environmentally sensitive industries like utilities, oil and gas.

Researchers also compared each firm's environmental scores using data from Trucost, which rates an organization's environmental impact, by calculating their emissions of greenhouse gases, water, waste and air pollutants, as well as their use of natural resources.

The study researchers also looked at whether each company was a member of the Dow Jones Sustainability Index, which tracks the financial performance of leading sustainability-driven companies worldwide.

The researchers warn that although sharing data on corporate environmental practices may serve to inform the public, extensive disclosure may stunt companies' initiatives to become more environmentally friendly.

The results also showed that being included in the Dow Jones Sustainability Index positively influenced a company's corporate reputation, even if they had a poor environmental performance ranking.

"Perhaps more troubling, our results also suggest that membership in the DJSI appears to be driven more by what firms say than what they do," the researchers wrote in the study. "Thus, like voluntary disclosure, the DJSI may actually be hindering improved future corporate environmental performance."

The study was published in the January issue of the journal Accounting, Organizations and Society.