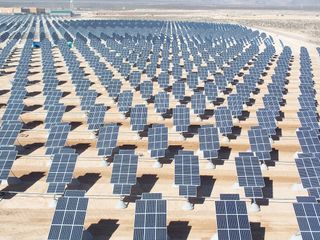 On 140 acres of unused Nellis land, 70,000 solar panels await activation as the first third of the solar photovoltaic array gets commissioned Oct. 12 with the other 66 percent of the panels scheduled for activation in the next two months.
(Image: © U.S. Air Force photo by Airman 1st Class Nadine Y. Barclay)

A world in need of faster computers, smarter phones and more energy-efficient light bulbs threatens to strain the small supply of rare metals used by the global electronics industry. But limits on the production of such rare metals mean the supply can't easily expand to meet the demand for innovation in both consumer electronics and clean technologies.

Scarce metals such as gallium, indium and selenium — known as "hitchhiker" metals — come only as byproducts of mining major industrial metals such as aluminum, copper and zinc. That makes it hard to simply boost production of hitchhiker metals whenever industries face a shortage, even if the metals have become critical components of everything from high-performance computers to solar panels.

"With respect to metals that are hitchhikers, a higher price isn't going to lead to much more production," said Robert Ayres, a physicist and economist based at the international business school INSEAD in France. "And therefore it's much more important to think in terms of conservation, recycling and substitution."

That sobering message was delivered by Ayres at a Royal Society discussion meeting held in London Jan. 30. He wants both governments and industries to come up with a standard recycling process that could reuse rare metals.

"You produce something, you use it, but you don't just toss it in a landfill; it goes to another stage and another, and eventually the rare materials are recovered," Ayres told InnovationNewsDaily. "At present, hardly any are recovered."

Take gallium as an example. Gallium is a small byproduct of mining bauxite and zinc, but it has become a critical component for technologies such as lasers, energy-efficient LED lighting and solar panels. The metal has also become a replacement for silicon in faster microchips powering the latest generation of smartphones.

U.S. demand for gallium relied upon $66 million of overseas imports in 2011, according to the U.S. Geological Survey. And just one company, in Utah, recovered and refined gallium from scrap metal and impure gallium metal.

Indium has become a crucial ingredient in the liquid crystal displays for smartphones and in some types of solar panels. A third hitchhiker metal, selenium, also forms part of the solar panels containing both gallium and indium.

"Tellurium, part of the lowest-cost photovoltaic material, is only available from copper refineries," Ayres pointed out. "And so the quantity available in the world isn't anywhere near enough to satisfy the potential demand for thin-film photovoltaic surfaces (solar panels)."