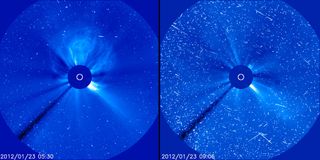 Fast-moving protons from a solar energetic particle (SEP) event cause interference that looks like snow in these images from the Solar Heliospheric Observatory taken on January 23, 2012.
(Image: © SOHO/ESA & NASA)

An explosion in the sun's atmosphere called a "solar flare" sent a huge burst of matter and energy hurtling into space Monday (Jan. 23), and some of the material is now raining down upon Earth. Solar flares are difficult to predict, but they often come in clusters, so more floods of solar radiation are likely to hit Earth soon.

During another recent period of extreme solar activity, Kobus Olckers, a forecaster at the South African Space Weather Office in Cape Town, advised members of the public to avoid going outside and to wear high-SPF sunscreen if they do. But will some SPF 45 really protect you from the extra radiation?

Yes – sunscreen will block the radiation. But there isn't actually that much extra to worry about.

"Ultraviolet radiation from the sun briefly goes up by factors of thousands during solar flares," said Todd Hoeksema, a solar astronomer at Stanford University. "That's outside the Earth's atmosphere, though. The amount of UV radiation that gets to the ground is about the same as normal," Hoeksema told Life's Little Mysteries.

Most of the high-energy radiation coming from the sun during a solar flare gets absorbed by our atmosphere. "UV light is very energetic so it interacts with the atmosphere , breaking molecules apart and ionizing atoms. As it goes though the air, more and more gets absorbed. Most of it gets absorbed 80 or 100 miles above us," he said.

The extra UV light that does make it through the atmosphere — and onto your skin — isn't enough to worry about, Hoeksema said.  "The increase in the amount of UV on the ground is minimal."

These radiation showers are actually fairly common, happening a few times a year during the active part of the sun's 11-year cycle. And while they pose no real risk to Earth-bound humans, the high-velocity protons , gamma rays,  X-rays and other types of ionizing radiation they eject can be hazardous to astronauts in orbit. (In case you're wondering, sunscreen won't block high-velocity protons or the like.)

The normal daily influx of UV light is the real concern. "What matters is the cumulative dose of UV radiation you get, not a small increase here and there," Hoeksema said. Regular exposure to UV radiation causes genetic mutations to occur in skin cells that can lead to skin cancer. "Since the effect is cumulative,” he said, “I think that people should wear sunscreen all the time."

This story was provided by Life's Little Mysteries, a sister site to LiveScience. Got a question? Send us an email and we'll crack it. Follow Natalie Wolchover on Twitter @nattyover.