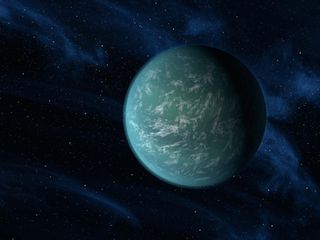 This artist's conception illustrates Kepler-22b, a planet known to comfortably circle in the habitable zone of a sun-like star.
(Image: © NASA/Ames/JPL-Caltech)

While 2011 was a huge year for alien-planet discoveries, 2012 could bring something even more exciting: the first true "alien Earth."

This year saw the tally of confirmed exoplanets top 700, with NASA's Kepler space telescope flagging thousands of additional candidates that still need to be verified. And just this month, Kepler scientists announced two landmark finds — the first two Earth-size alien planets, as well as a larger world in its star's habitable zone, that just-right range of distances where liquid water (and possibly life as we know it) could exist.

These and other recent discoveries suggest that the prized quarry of many exoplanet hunters — an "alien Earth" — could be just over the horizon. In fact, such a planet may well pop up in the next round of Kepler candidates, which should be released next year, researchers said.

"I'm guessing that this next planet catalog is going to see, finally, some numbers of points that are really, truly Earth-sized and in the habitable zone," said Natalie Batalha, deputy leader of the Kepler science team at NASA's Ames Research Center in Moffett Field, Calif. "That's something that I really look forward to, is getting those candidates." [Vote Now! Most Intriguing Alien Planets of 2011]

The year has seen a huge increase in the number of known exoplanets. At the start of 2011, astronomers had confirmed 528 alien worlds, according to the Extrasolar Planets Encyclopedia, a database compiled by astrobiologist Jean Schneider of the Paris-Meudon Observatory.

Less than one year later — and just 16 years after the first alien planet was found orbiting a sun-like star — the count now stands at 713. And thousands more are waiting in the wings.

On Dec. 5, Kepler scientists announced the discovery of 1,094 new exoplanet candidates, bringing the mission's total tally in its first 16 months of operation to 2,326. So far, just 33 of these potential planets have been confirmed by follow-up observations, but researchers have estimated that at least 80 percent of them will turn out to be the real deal.

These huge numbers are exciting by themselves, but the search for alien planets isn't really about increasing the tally. Rather, it's a quest to better understand the nature and diversity of alien worlds, researchers say.

"You can only understand the diversity of systems if you have enough numbers that speak to the statistics," Batalha told SPACE.com. "You really want a large sample, and that's where Kepler's going to make a huge contribution."

The diversity of alien worlds and systems appears to be high. Astronomers have found one planet as light and airy as Styrofoam, for example, and another as dense as iron. And in September, the Kepler team announced the discovery of an alien planet that circles two suns, like Luke Skywalker's home planet of Tatooine in the "Star Wars" films.

Researchers have also confirmed several planets in their stars' habitable zones. None of them can be considered true alien Earths, since they're significantly larger than our home planet. But the search for Earth's twin may bear fruit as early as next year, researchers say.

The Kepler space telescope, which launched in March 2009, hunts for alien planets using a technique known as the transit method. It looks for the tiny, telltale dips in a star's brightness caused when a planet transits, or crosses in front of, the star from Kepler's perspective, blocking a fraction of the star's light.

Kepler needs to witness three such transits to flag a potential planet, so it's not terribly surprising that the telescope has yet to find a true Earth twin, researchers have said. If an alien version of Kepler were pointed at our solar system, after all, it would take three years for the instrument to detect our home planet.

The longer Kepler operates, the better its chances of detecting a truly Earth-like world get. And now that the instrument has nearly three years under its belt, the finds are getting especially intriguing.

"We're really starting to get down to smaller planets with longer [orbital] periods," Batalha said.

So far, none of those planets have been both Earth-size and in their stars' habitable zone. But that could change with the next announcement of Kepler candidates, which Batalha said might come in June or July.

"You've got to be patient, got to wait it out another six months or so; hopefully we'll see those trickle in," Batalha said. "This is going to be an exciting spring."

Batalha and the rest of the Kepler team aren't making any guarantees, of course. And any alien Earth candidate spotted by Kepler would still have to be confirmed, a process that usually takes months, so predicting timelines of official announcements is difficult.

But the rapid pace of exoplanet discoveries suggests that the first Earth twin will be found relatively soon, researchers said.

"What I will tell my freshmen this year is, you know, that these discoveries may unfold while they are students here at the college. And so, whether they're happening in six months or whether they're happening in four years, you can't say," Kepler science team member Dave Charbonneau of Harvard University told reporters today (Dec. 20). "But it's a really remarkable time."