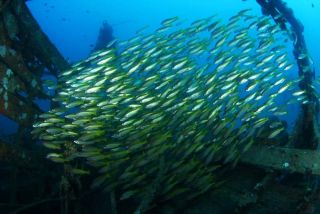 When deciding on a direction to swim in, a few uninformed fish may sway the group toward the majority opinion, new research finds.
(Image: © Melvin Lee | Shutterstock)

Ignorance can be bliss, but it seems it can also promote democracy.

Strongly opinionated members can determine a group's consensus decision, even when they make up only a small minority. New research of animal behavior shows, however, that adding ignorant or uninformed members to the group can counteract the minority’s powerful influence and promote a more democratic outcome.

Researchers used several computer models to investigate the decision-making process in various animal groups when a majority wants to travel in one direction and a minority wants to go in another.

When the strength of the two packs' preferences was equal, the group was much more likely to follow the majority. But when the minority had stronger feelings than the rest of the group about its direction, it was able to control the decision.

When the researchers added a third crowd that was ignorant of the options, the majority was able to spontaneously wrestle the decision back from the minority.

"It's very counterintuitive," said Iain Couzin, an evolutionary biologist at Princeton University, who was lead author of the study published in the Dec. 15 issue of the journal Science. "We previously assumed that uninformed individuals promote extremism by being easily exploited by the [strong] minority."

Couzin and his colleagues performed follow-up experiments with a school of freshwater fish to see how well their models apply to the real world. "One of the nice things about animal groups like schooling fish is that you can read out what they are trying to do just from their motion," Couzin told LiveScience.

Using a group of golden shiners, the researchers trained two groups of the fish to associate a food reward with two different color targets: one yellow, one blue. The fish, like humans and other animals, have certain sensory biases, Couzin explained. Just as humans have an innate reaction to the color red, golden shiners are naturally attracted to yellow, so the fish trained to expect food by following yellow dots were more strongly drawn to their target than those trained with blue dots.

When the researchers brought the two groups together and the yellow-target fish were in the minority (five yellow to six blue), the school of golden shiners followed the smaller group about 80 percent of the time. But when the researchers added five untrained fish to the mix, the group chose the majority’s blue target half the time.

With 10 untrained fish, the group chose the blue target more than 60 percent of the time, showing that ignorant individuals really can promote a more democratic decision.

Couzin is interested in determining how widespread the phenomenon is by testing the decision-making model in other groups, including humans. He’d also like to look for this process in the activity of nerve cells.

"There are fundamental parallels between decisions in groups and neural decision-making," he said. "There's likely to be a whole bunch of neurons that don’t have information and can be persuaded by other neurons." [How Honeybees Make Decisions]

Carl Bergstrom, a University of Washington evolutionary biologist, said he was surprised by the results and is curious to see what happens when there are more than two options (or preferences) available.

"The dynamics between groups can get extremely complicated," said Bergstrom, who was not involved in Couzin's research but who, with his University of Washington colleague Jevin West, wrote a perspective piece accompanying the research article.

The scientists stressed that the results of the study cannot be extrapolated to decision-making in human groups. Bergstrom explained that opinionated individuals in the models could not spend extra time lobbying the others and couldn't make false claims about an option, as humans can.

"In the models, individuals could only be obstinate about changing their minds," he said.

West said, "We definitely want to caution against jumping to the conclusion that the whole Occupy Wall Street movement can learn something from the study."