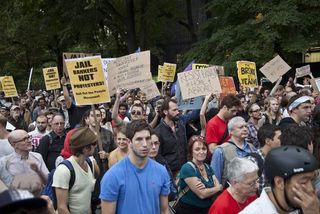 Want to attack a policy or proposal without looking like a bad guy? Labeling those behind it as "extreme" or "radical" should do the trick, new research indicates.

This may explain why these labels are so common in political attacks, said Thomas Nelson, a study researcher and associate professor of political science at Ohio State University. For instance, foes of Obama's health-care reforms attacked it by describing him as a "socialist." Similarly, Democrats have described the Tea Party as "radical" and sought to associate Republican opponents with it.

"The beauty of using this 'extremism' tactic is that you don't have to attack a popular value that you know most people support," Nelson said. "You just have to say that, in this particular case, the supporters are going too far or are too extreme."

In one experiment, study participants read one of three versions of an essay discussing the 2003 controversy around the "men only" policy of the Augusta National Golf Club. All argued that the PGA Tour should move the Masters Tournament if the club refused to change its policy. However, one version said the proposal to move the tournament was led by "people" and "citizens," a second said "feminists," and a third referred to "radical feminists," "militant feminists" and "extremists," who were also seeking to get rid of separate locker and restroom facilities for men and women. [6 Gender Myths Busted]

Afterward, those who had read the version that attributed the proposal to "radical feminists" were more likely to support the golf club and its rules banning women and less likely to support moving the tournament and female membership in the club.

In another experiment, participants read the same blog entries and then ranked four values in order of importance: upholding the honor and prestige of the golf tournament; protecting freedom of private groups to set up their own rules; supporting equal opportunities for both men and women; and maintaining high standards of service for members of private clubs.

"Tying the proposal to feminist extremists directly affected the relative priority people put on gender equality versus group freedom, which in turn affected how they felt about this specific policy," Nelson said. "Perhaps thinking about some of the radical groups that support gender equality made some people lose respect for that value in this case."

This research, also conducted by Joseph Lyons and Gregory Gwiasda, both former graduate students at Ohio State, appears in the October issue of the journal Political Psychology.