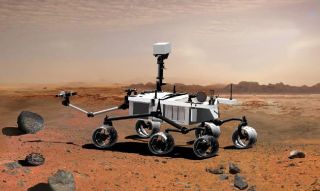 The rover is to be powered by nuclear generator (not shown in this drawing) permitting the Mars machinery a long range ability to explore science targets.
(Image: © NASA/JPL/Corby Waste)

NASA's new state-of-the-art Mars rover, which is slated to launch into space on Saturday (Nov. 26), will investigate whether the Martian environment is — or ever was — habitable. While the ambitious mission is expected to help researchers understand the Red Planet better than ever before, it is also a key stepping stone in the wider search for alien life in the universe, scientists said.

The Mars Science Laboratory (MSL), or Curiosity rover, is equipped with a suite of instruments that will allow scientists to study features on the Martian surface and the surrounding environment to piece together clues of the planet's potential habitability.

Curiosity is carrying 10 instruments that will allow it to dig, drill and analyze rock samples. The vehicle also has the ability to fire a laser at rocks, creating a cloud of plasma that can be scanned to reveal its chemical makeup.

As the rover rolls along the surface of Mars, it will also be able to sniff the air to help scientists paint a clearer picture of the Martian environment, Conrad said.

The Mars Science Laboratory is not a life detection mission, but by understanding the chemical environment of Mars, and by searching for signs of habitability in the planet's geological history, researchers can gain additional insight into whether and how microbial life could exist on the Red Planet. [7 Biggest Mysteries of Mars]

But, like any mission of exploration, it's impossible to say in advance what discoveries will be made.

"Do we anticipate that we'll learn a lot about Mars? Absolutely," Conrad said. "Do we know specifically what that will be? We have no clue."

Still, the car-size Curiosity rover should help clarify whether or not Mars ever hosted life. In addition, the mission is also an important stepping stone for other searches for alien life.

"The game is afoot, the search is on and MSL is taking a very important step and part of it is developing a strategy for narrowing that search," Mary Voytek, director of NASA's astrobiology program, said.

Ultimately, scientists said the search for life elsewhere in the universe is of fundamental importance to humankind.

"It'sthe argument that is made for exploration anywhere," said Catharine Conley, a planetary protection officer at NASA. "We don't know what we're going to find, but if we don't go there, we're not going to find it."