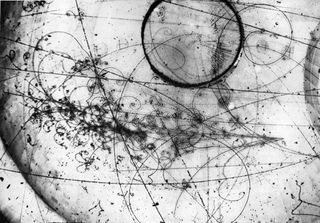 Those famous neutrinos that appeared to travel faster than light in a recent experiment probably did not, a group of scientists say, because they failed to emit a telltale type of radiation.

According to one physicist in the group, "it's hard to argue against" this latest objection to the controversial faster-than-light result produced by other scientists in the same Italian laboratory.

In a paper posted to the physics pre-print site arXiv.org, the group, which runs the ICARUS (Imaging Cosmic and Rare Underground Signals) experiment based at Gran Sasso Laboratory (LNGS) outside Rome, argues that any faster-than-light particles would be expected to emit a particular type of radiation as they traveled. Because they didn't detect any of this coming from the neutrinos — and because the particles didn't seem to be shedding energy in the form of undetected radiation — they must have been traveling at or below the speed of light.

Ultimately, the ICARUS group is arguing that the OPERA group, which ran the experiment that measured neutrinos making a trip from CERN Laboratory in Switzerland to LNGS in Italy 60 nanoseconds faster than light would have done, must have made some mistake in its timekeeping. [Neutrinos: Not So Fast, Some Say]

The ICARUS group's argument is as follows. In some special cases, particles are able to travel faster than photons (particles of light) when penetrating a medium, such as glass. This happens when the photons frequently interact with atoms in the medium, getting absorbed and re-emitted so often that their speed through the medium falls far below "c", the notation used to describe the speed of light in a vacuum. This allows other particles to move through the medium faster than they do, though still slower than "c".

When charged particles propagate through a medium faster than light does, they emit a flurry of photons known as Cherenkov radiation, analogous to the sonic boom that comes from fighter jets exceeding the speed of sound. Cherenkov radiation is predicted by the "standard model" of particle physics and is also observed in the real world, most often as a faint blue glow emanating from the cores of nuclear reactors.

Immediately after OPERA first announced its result two months ago, physicists Andrew Cohen and Sheldon Glashow at Boston University argued that radiation analogous to Cherenkov radiation, but tailored to the case of neutrinos rather than charged particles, ought to have been emanating from the neutrino beam studied at LNGS. As the neutrinos emitted this radiation, they ought to have been losing a commensurate amount of energy.

David Cline, a physicist at the University of California, Los Angeles, and a member of the ICARUS team, said Cherenkov-like radiation in the form of photons and electron-positron pairs would have spewed from what physicists call "virtual particles" hovering around the neutrinos.

"Cherenkov light comes from these particles when the speed of light is exceeded. It is hard to argue against these virtual particles making the Cherenkov light," Cline told Life's Little Mysteries, a sister site to LiveScience.

Just days after the OPERA team announced that it had improved and repeated its famous faster-than-light neutrino measurement, the ICARUS physicists, just down the hall from them, rebutted it. They have analyzed data collected from the neutrino beam at LNGS and have found no evidence of radiation or electron-positron pairs coming from the neutrinos. They also say there were no dips in the neutrinos' energy spectrum that would imply that they were emitting Cherenkov-like radiation. Thus, according to the accepted laws of physics, the neutrinos' speed must have been equal to but no greater than the speed of light.

The only possibility of a counterargument, Cline said, is if the venerable, time-tested standard model of particle physics is proven wrong. "Of course, that could happen," he said.