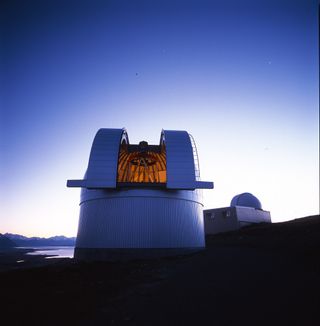 In his last year of graduate school at Stanford University, David Bennett happened to read an article in the Astrophysical Journal that discussed the gravitational microlensing method. Though he had been training as a theoretical particle physicist and cosmologist, the power of this method impressed him. Microlensing is a special case of gravitational lensing, in which separate images cannot be resolved but changing magnifications are detectable.

He thought it could be used to solve astrophysics problems, like those concerning the nature of the mysterious dark matter. Dark matter is the invisible stuff that makes up over 80 percent of the universe; it doesn't emit or scatter light or other electromagnetic radiation, and so cannot be directly detected via optical or radio astronomy.

As a research professor at the University of Notre Dame, he currently pursues the study of extrasolar planets as a member of both the MOA and PLANET collaborations and has led the effort to conduct a microlensing planet search from space. A space-based extrasolar planet search using the microlensing method is a major part of the WFIRST mission, which was ranked as the top priority large space mission by the National Academy of Sciences' Astro2010 Decadal Survey.

What inspired you to choose this field of study? My main inspiration came from the fact that I had a role in creating the field of observational gravitational microlensing. I was trained as a theoretical particle physicist, and was very interested in the dark matter problem in the 1980s, when I noticed Bohdan Paczynski's 1986 paper indicating that baryonic dark matter could be either discovered or definitively ruled out.

In a (presumably) somewhat tongue-in-check early history of microlensing, Paczynski attributed my enthusiasm for this method to my ignorance of astronomy. Unlike seasoned astronomers, I "did not know the project could not be done." I suggested the project to Charles Alcock, who was then at the Lawrence Livermore National Lab, a few years later. I came out to Livermore as a postdoctoral researcher when Alcock decided to pursue it.

What is the best piece of advice you ever received? One very good piece of advice that I didn't take occurred during the Pons-Fleischmann "cold fusion" fiasco of 1989. Stanley Pons and Martin Fleischmann had claimed to achieve nuclear fusion in the electrolysis of heavy water using electrodes made of palladium, but it soon became clear to physicists that this claim couldn't possibly be correct.

If their claim had been correct, it would mean an inexpensive, near limitless, source of energy with very little in the way of resulting pollution, and so, by now it would be running most of our power plants. I was working as a postdoctoral researcher in the Princetonphysics department at the time, and some of the condensed matter physicists at Princeton had a financial market strategy to profit off of this.

They bought palladium futures immediately when the Pons-Fleischmann paper came out, and then made "short sales" of palladium futures after the palladium prices rose. They made a great deal of money based on what was basically common knowledge among physicists. But, I did not follow this advice because I was quite unfamiliar with financial markets.

What was your first scientific experiment as a child? I don't actually recall doing any real scientific experiments as a child, although I did build and fly a few model rockets. I always wanted to be a theorist rather than an experimentalist or an observer when I was a kid. It wasn't until I had my PhD and was working as a theoretical cosmologist that I realized how rewarding experimental physics and observational astronomy could be.

What is your favorite thing about being a researcher? It is a real delight to be able to learn new things about our universe that weren't previously known. In my own field, we must analyze change in brightness of a microlensed star due to the foreground lens system (a star and one or more planets) passing in front of it. This is referred to as a "light curve," and it is generally a satisfying moment when you successfully model the light curve to determine the nature of the lens system responsible for the microlensing event. But the statistical analysis of many events can be even more rewarding because that tells us things about the general properties of planetary systems that weren't previously known.

What is the most important characteristic a researcher must demonstrate in order to be an effective researcher? It is difficult to single out one characteristic as the most important, but one thing that is very important in astronomy is skepticism and creativity in finding ways to test what you think might be a new discovery. In astronomy, we don't have the objects of our research in our labs, and we are limited in the information that we can gather. So, we often have to be quite resourceful in order to establish whether our interpretation of a set of observations is right or wrong.

What are the societal benefits of your research? I suppose that many people think that astronomy research has few societal benefits, but this opinion reflects a very narrow view of the question. Astronomical fields like cosmology and the study of extrasolar planets teach us things that a large fraction of society is interested in knowing, and that, itself, is a benefit to society.

Recall the outcry a few years back when the last Hubble Space Telescope servicing mission was (temporarily) canceled, or witness the current public outcry over the threat that the James Webb Space Telescope might be canceled. It is clear that the knowledge gained from astronomical research in general and the search for extrasolar planets, in particular, is considered a benefit to society.

An even greater benefit to society comes from the inspirational effect of these discoveries. These discoveries excite young people and encourage them to further their education in the hopes of contributing to this type of science. But in the process of furthering their education, they often discover other, somewhat more obscure, fields of study that have more direct economic benefits to society. So the inspirational aspect of extrasolar planet discoveries does provide a direct benefit to society.

Although I rarely worked with him directly, I would have to say that the late Bohdan Paczynski has had the most influence on me. It was his 1986 paper on gravitational microlensing that got me interested in the field. Then, later on, as a member of the OGLE collaboration, he pushed the idea that microlensing data should be made available to observers from other groups immediately, so that observing decisions on ongoing events could be made based on the complete set of data.

This was contrary to the competitive instincts of many of us in other observing groups, but this strategy of "putting the science first," ahead of personal rewards, has been instrumental in the discovery of extrasolar planets with the microlensing method. All of the planets discovered by microlensing to date have involved collaborations of several independent groups. If we hadn't followed Paczynski's advice, it is quite possible that no planets would ever have been discovered using microlensing.

What about your field or being a researcher do you think would surprise people the most? Many people know that the first paper to describe gravitational lensing was published by Einstein in 1936. This is perhaps Einstein's most well known paper written in English. However, it is less well known that Einstein only wrote the paper rather reluctantly after persistent urging by Rudy W. Mandel, a Czech engineer who had apparently traveled from Europe to Princeton for the purpose of getting Einstein to write the paper.

Einstein felt it necessary to apologize to the journal editor after the paper was published. He stated that the paper was, "of little value, but it makes the poor guy happy," referring to Mandel. He thought that the gravitational lensing effect required such perfect alignment between the lens star and the background source star that it would never be observed.

The first gravitational (micro)lensing events due to stars were discovered in 1993, and by now, more than 1000 are seen every year. One microlensing event was even discovered by a Japanese amateur astronomer looking through binoculars in 2007.

Well, I'd probably grab my laptop from my office because it is easy to carry, but I don't really have any data that isn't backed up. My "labs" consist of a number of observatories thousands of miles away in the Southern Hemisphere, and it is the telescopes in those observatories that I would most want to save. But, it simply isn't practical to move them. Unfortunately, I have some direct experience with this as two telescopes that I previously used were destroyed in a 2003 fire at Mt. Stromlo Observatory in Australia.

What music do you play most often in your lab or car? I usually listen to classic rock bands like The Who or the Rolling Stones, plus some newer bands recommended by my daughter. I often play music in my office as it drowns out outside sounds that would otherwise be distracting.

Editor's Note:This research was supported by the National Science Foundation, the federal agency charged with funding basic research and education across all fields of science and engineering. Any opinions, findings, and conclusions or recommendations expressed in this material are those of the author and do not necessarily reflect the views of the National Science Foundation. See the ScienceLives archive.