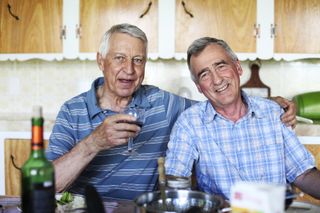 Despite the reported lack of services, 90 percent of the subjects said they felt good about belonging to their communities, according to the researchers.
(Image: © Dreamstime)

Lesbian, gay, bisexual and transgender (LGBT) baby boomers face higher rates of physical disabilities, depression and loneliness than their heterosexual counterparts, according to a new study.

LGBT adults were also more likely to binge-drink and smoke than heterosexuals of similar ages.

"The higher rates of aging and health disparities among lesbian, gay, bisexual and transgender older adults is a major concern for public health," study researcher Karen Fredriksen-Goldsen, director of the University of Washington's Institute for Multigenerational Health, said in a statement. "The health disparities reflect the historical and social context of their lives, and the serious adversity they have encountered can jeopardize their health and willingness to seek services in old age."

The team surveyed 2,560 LGBT adults ages 50 to 95 from across the U.S. and found that many of the subjects' unique circumstances lead to physical and mental distress, with nearly four out of 10 participants asserting that they had considered suicide at some point.In addition, 47 percent of respondents reported a disability, 31 percent reported depression and 53 percent reported loneliness.

The participants were less likely to be married or partnered than heterosexuals, which may result in less social support and financial security as they age, according to the researchers. The study authors note that LGBT adults were more likely to live alone, and because they may not have children to help them, and are at a greater risk for social isolation, which is "linked to poor mental and physical health, cognitive impairment, chronic illness and premature death," Fredriksen-Goldsen said.

The study also revealed that 80 percent of the participants had been victimized and discriminated against because of their sexual orientation or gender identity — incidents that may contribute to their poor health, according to the researchers. For example, 21 percent of respondents said they were fired from a job because of their perceived sexual orientation or gender identity.

Another 21 percent did not tell their doctors about their sexual orientation or gender identity, because they feared that they would be refused services or receive inferior health care, experiences that 13 percent of the respondents had actually endured. In a medical setting, a lack of openness about sexuality "prevents discussions about sexual health, risk of breast or prostate cancer, hepatitis, HIV risk, hormone therapy or other risk factors," Fredriksen-Goldsen said.

The study participants also cited senior housing, transportation, legal services, support groups and social events as services needed in the LGBT community. The researchers note that despite the reported lack of services, 90 percent of the subjects said they felt good about belonging to their communities.

Fredriksen-Goldsen presented some of the study's key findings last week during a congressional briefing.