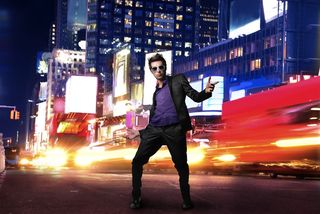 What is this guy communicating with his dance moves?
(Image: © oily, Shutterstock)

Men who hit the dance floor may be revealing more than their ability to cut a rug, according to a new study that finds women judge men with conscientious and agreeable personalities as better dancers.

The study builds on previous research that found women judge the dance movements of stronger men as more attractive and more assertive, and that risk-taking men also get pegged as better dancers. The new research suggests that the information conveyed by dance is even broader, according to study researcher Bernhard Fink, of the University of Göttingen, in Germany.

"We argue that personality is — to some extent — signaled via body movement (dance in particular, as it is the most complex body movement)," Fink wrote in an email to LiveScience. "If that were true, it would explain why dance is such a prominent topic in almost all human societies."

Fink and his colleagues of Northumbria University in the U.K. had previously found that ladies love certain dudely dance moves, particularly a variation of movements in the neck and the torso. Their studies use motion-capture technology much like that used in computer-animated movies to record men's dance moves and transfer them onto featureless avatars. That technique ensures that the women watching the dance moves won't be distracted by the guys' attractiveness or other features.

The findings that women seem able to pick up on factors like strength and risk-taking  from watching just a few seconds of dance moves prompted the researchers to look at other personality traits. They focused on the "Big Five" traits, five basic attributes that describe the spectrum of human personality.

Those traits are openness (a willingness to explore new things), conscientiousness (a tendency toward self-discipline), extroversion (social exuberance), agreeableness (compassion and care for others) and neuroticism (a tendency to experience negative emotions).

The researchers asked 48 men between the ages of 18 and 42 to fill out personality questionnaires that would show where they fell on the spectrum of each trait. Then the men danced to the drumbeat of Robbie Williams' 1997 song "Let Me Entertain You." The music and lyrics were cut out, to prevent the men's love or hatred of the song from influencing their enthusiasm to dance.

"Dancing in front of cameras is not easy for many people, and some 'support' from a drumbeat usually helps them in the laboratory setting," Fink said.

Next, 53 women between the ages of 17 and 57 watched 15-second clips of the men's dance moves transposed onto a computer-generated avatar. Each woman judged each man's dancing ability on a scale of 1 to 7.

The results revealed that the more conscientious and socially agreeable a man's personality, the more likely women were to view him as a good dancer.

The researchers also found patterns suggesting that extroverts might be better dancers, while people who scored high in neuroticism or openness were seen as worse on the dance floor. But those patterns were not statistically significant, meaning they could have been the result of chance.

Fink says he believes a larger study sample would provide the statistical oomph needed to prove that those nonsignificant traits are linked to a guy's ability to break it down. But put together with old findings, he said, the new study suggests that women are sensitive to discerning personality traits that would be important for both short-term and long-term relationships.

Likewise, he said, the earlier study on risk-taking suggests that women are impressed by the dancing of men who are bold sensation-seekers — maybe not the guy you can trust to stick around and help you raise a baby, but one who would likely contribute a healthy set of genes to his offspring.

Of course, the research hasn't yet established how, if at all, women use judgments of dance quality to decide whether to pursue a potential mate. Future studies will need to ask women to watch men's dance moves and then decide whether the guy would make a good long- or short-term partner, Fink said. He and his colleagues are also interested in turning the tables to find out what sort of information female dance moves might communicate.

As for whether you can tune your dance moves to look more consciousness and agreeable, it turns out that Shakira was right: Hips don't lie.

"If one would like to 'fake' a certain (positive) personality in order to attract women, this is probably doomed to fail," Fink said. "An individual's body movement pattern is characteristic and any attempt to fake it would result in less positive judgments of that person."

The research is set to appear in an upcoming issue of the journal Personality and Individual Differences.